Georgia Film Day at the Capitol 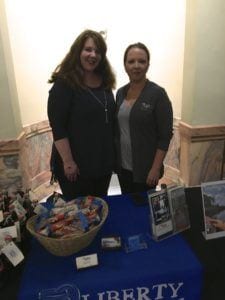 The event was set up to highlight the growing film and entertainment industry in Georgia and allow production companies, visitors bureaus and others industry professionals to showcase their locations and services. In FY 2015, Georgia-lensed feature films and television productions generated an economic impact of $6 billion.

Liberty County was designated a Camera Ready Community in 2010 and since that time, interest in filming here has grown.

“We’ve had several TV shows and movies film in Liberty County already and the requests are constantly increasing,” said LCCVB CEO Leah Poole. “We have so much pristine coastal scenery that’s great for cinematography, not to mention, we’re also very friendly toward those who wish to film here. We try to help them in any way they need. The feedback we’ve gotten is that we’re very hospitable, and that’s something memorable that encourages them to want to film here again and again.”

LCCVB CEO, Leah Poole and Program Manager, Amanda Scott represented Liberty County with a table display to market the destination as a film location. Information was provided on previous films and TV shows that have filmed in the area, including “Ben & Ara”, “Intervention”, “Side Sho”, “Siren”, “Ghost Hunters”, “Born in the Wild”, “Finding Big Foot”, “A Promise”, “My Brother’s Keeper” and “Fireball Run.”

“Film tourism means business in Georgia, and we want to have a piece of that business here,” said Poole. “When the actors and crew film here, our economy benefits from the spending they do while they’re in town. When their films are shown at festivals around the world, other people in the business want to know where they got those beautiful shots. The benefits of engaging with the film industry and building relationships are very positive.”

Find out more about film in the state of Georgia by visiting http://www.georgia.org/industries/entertainment/ or http://www.tourgeorgiafilm.com/

Call 912-368-3580 or email [email protected] for more information about tourism and hospitality in Liberty County.

Meals for the Homeless