A Walk at Dorchester Academy 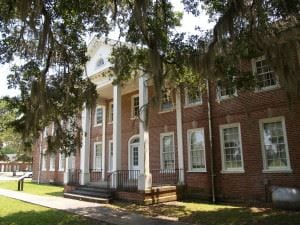 Imagine if you will walking among some of the most timeless oak trees to ever be created, all the while listening to someone tell you stories, true life accounts, about playing baseball with Martin Luther King Jr. That’s how I got to spend a lovely afternoon many (ok like 12 years now, you don’t need to know my age!) years ago with Mrs. Mary LeCounte Baggs on the beautiful grounds of Dorchester Academy in Midway.

Mrs. Baggs had to lean heavily on my arm as we strolled around, however, she refused to sit down somewhere to continue our conversation because she wanted me to see where the stories she was telling actually took place, walk the land where the baseball diamond used to be, see the spot where she sat with the other girls to chat, visualize the road she traveled back and forth to school each day.

Not many people are aware that Dr. King and his compatriots spent quite a bit of time in what was then sleepy little Liberty County. They don’t know that the Dorchester Improvement Association still has the bedroom he used intact, and you can walk through the same room that he held planning meeting for his 1963 march on Birmingham and feel the goosebumps as you realize you’ve just encountered a piece of history very few realize or even know about.

It served as a school yes, which most people are aware of, but it also served as part of the Southern Christian Leadership Conference’s Citizen Education Program which worked toward attaining equality for African Americans in the South by teaching them their rights and helping them acquire the knowledge necessary at the time to become registered voters. 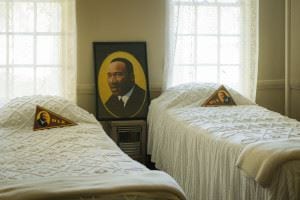 As a school by the year 1917 Dorchester Academy had eight frame buildings on 103 acres, 300 students and had become a fully accredited high school. It ceased operations in 1940 with the construction of a consolidated public school in Riceboro. Mrs. Baggs was a product of the school. During my afternoon stroll I got to hear all about how far she walked to attend classes, how dedicated she was to her education and how the women in her family encouraged her at every turn to always learn.

Mrs. Baggs actually met her husband at Dorchester in the 1920s. Mr. Earl Baggs was the first African American elected official in Liberty County since the post-Civil War reconstruction era. She was an educator in the public school system and received her Master’s from New York University. She was a founding member of the Liberty Retired Teachers Association, the Liberty County Chapter of the NAACP and the Dorchester Improvement Association.

Mrs. Baggs passed away in 2011 at the age of 100, having been alive since 1910. Can you imagine the things that she saw? From growing up in the Depression, living through numerous wars and world conflicts, the fight for not just Civil Rights but also Women’s Rights? It wasn’t until 1920 that women were granted that ability with the 19th amendment, so Mrs. Baggs would have been 10 at the time, seeing all of the women around her, that were such a strong influence in her life, given the same rights as men.

A natural born storyteller, in my opinion, to this day I remember walking with her under the oak trees, letting her hold onto my arm to avoid stumbling, and listening intently to ensure that I didn’t miss a word of what this significant woman had to impart. To have her shower so much attention on a young 20-something year old and care enough to share her knowledge was undoubtedly one of the most special moments I have had.

Continued proof that we can learn from the past, plan for the future and remember that elderly people, especially those who had lived as long as Mrs. Baggs can impart way more than just knowledge and wisdom, they are giving you pieces of themselves to carry on, hoping that what they created will not be lost in death, but rather expounded upon with future generations.

All photos by Joanna Ng Photography.