The weather is cooler, and cane-grinding time is here. This is something most young people usually only know about from an agricultural exhibit. When I was growing up in Long County a, “few years ago” it was common for farmers to grind cane and cook syrup. This was a great time for the community to get together. Everyone had to have a glass of the fresh-ground sweet juice and watch as the syrup was cooked, hoping to get a bottle of the great stuff to take home. Homemade cane syrup and sweet potatoes were what kept many Southerners from starving during the Great Depression! 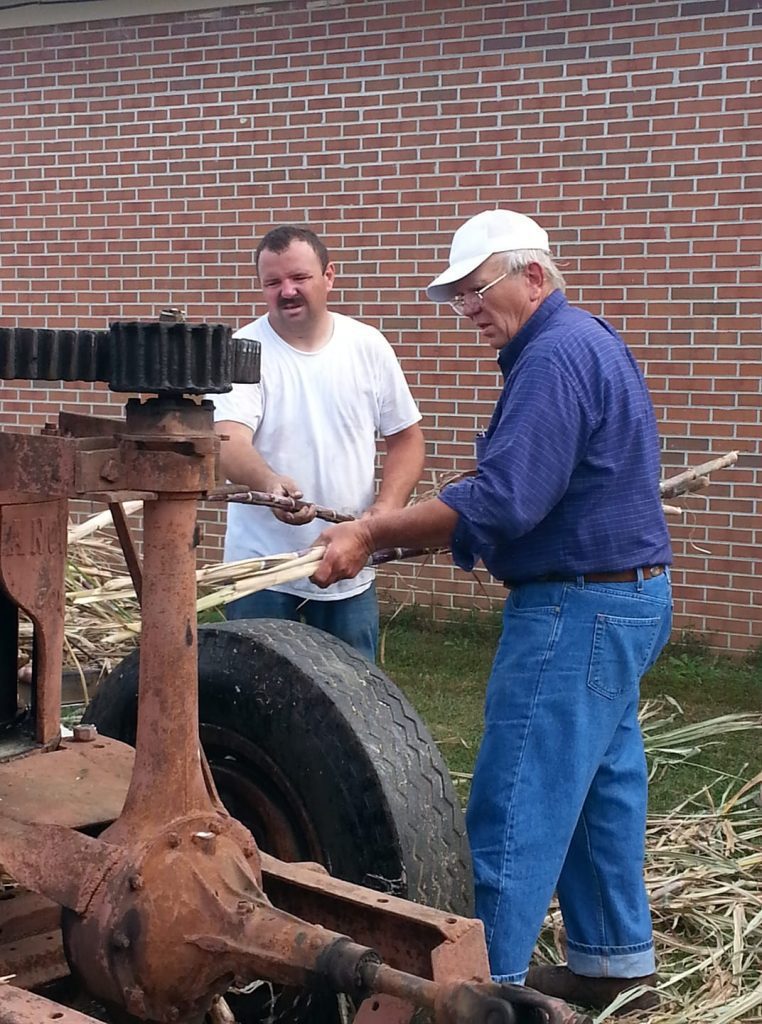 Daddy never grew cane for making syrup; however, he did help many other farmers make syrup. But he did have a couple of rows in the garden. We cut it and chewed it for the sweet juice. Making syrup was a hard, tedious job that required a lot of manpower and wood for the furnace. Now, almost everyone uses a gas burner, which certainly cut down on the work required. My husband, Gene, restored his grandfather’s cane mill and built the boiler on our farm in Tattnall County. An elderly gentleman who was visiting saw the cane mill and asked about a mule to pull the mill sweep. Gene told him that I was the mule and had to pull it. 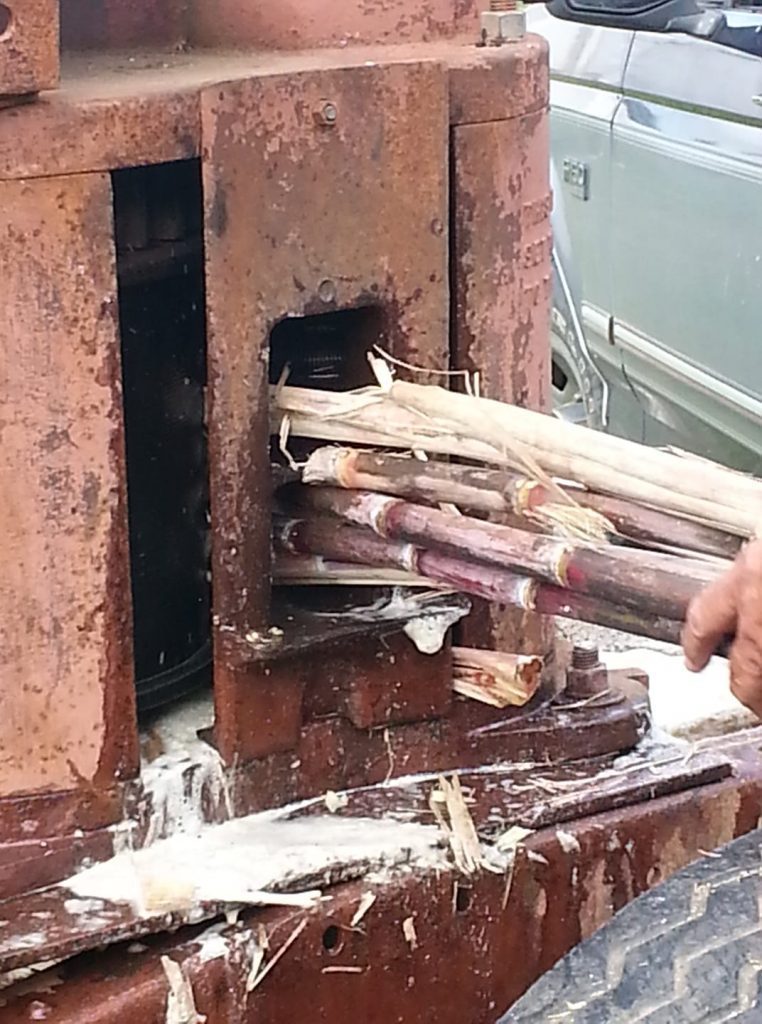 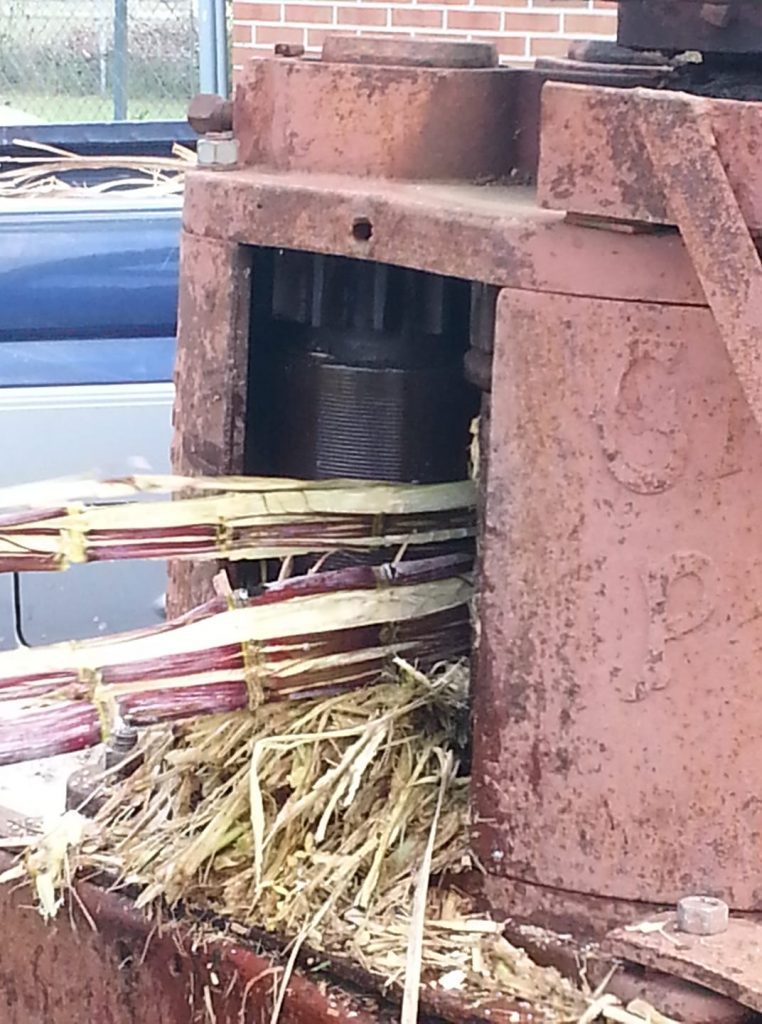 The man thought Gene meant it and told me, “Ma’am, I sure do feel sorry for you having to do all that hard work!” We have not been able to grow enough cane for a cooking yet, but we keep trying. Today is Nov. 12, and the temperature is supposed to drop really low the next two days. Gene cut down all his cane and covered it with dirt in the rows before the freeze. I kept one stalk to chew, but it is not as easy to do as when I was a child.

When attending an agricultural display in Lake Park, and I got to watch while they were making syrup. A man let the kids take an ice-cream stick and wipe around the edge of the syrup boiler after the syrup had been dipped up and put in a large tub to cool before turning on the spigot spout and filling the bottles. Each bottle sold for $6. It is hard to believe that many years ago, about two blocks from Hinesville City Hall where I worked, there was a big cane-grinding in November. I will let Thomas Layton Fraser (1899-1977) tell you his memories of the sweet times as he wrote about them in his book “Back When” published in 1976. Mr. Fraser gave me permission to share his stories. 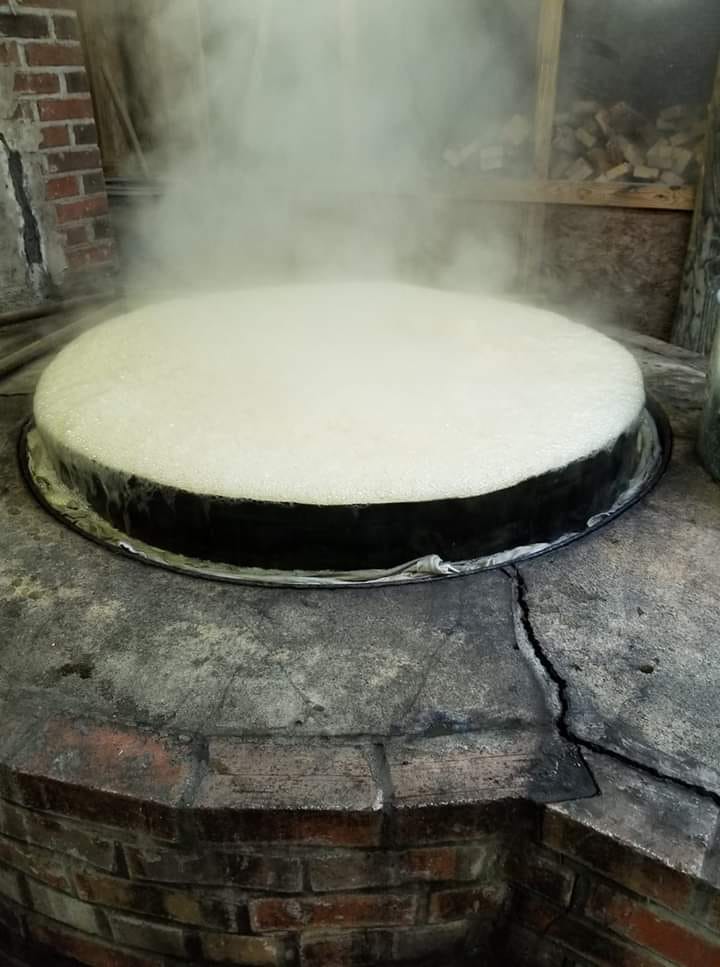 “Sugar-cane grinding time was really a time that we looked forward to each year in the late fall. I have often wondered how Papa made much money on syrup, but he did well. After the cane had ripened enough, I would go out to the cane patch almost every afternoon after school, sit in the cool shade of the cane foliage and chew three or four stalks of delicious, red sugar cane and then go back to the house feeling relaxed, full and happy.

“Mum Judy Wylie lived near McIntosh and had helped Mama with me when I was a baby. Just as surely as fall rolled around, I could expect to see Mum Judy coming up the front walk with two long stalks of ribbon cane under her arm for me. We grew the red and green sugar cane but not the combination of the two that had red and green stripes in it. The red cane was sweet and delicious, but harder than the green. The green was soft, but not quite as sweet as the red. The ribbon cane was sweet and soft. Mum Judy knew that I liked it, and I could expect to see her kind, wrinkled face and the two stalks of ribbon cane every year she was able to come. 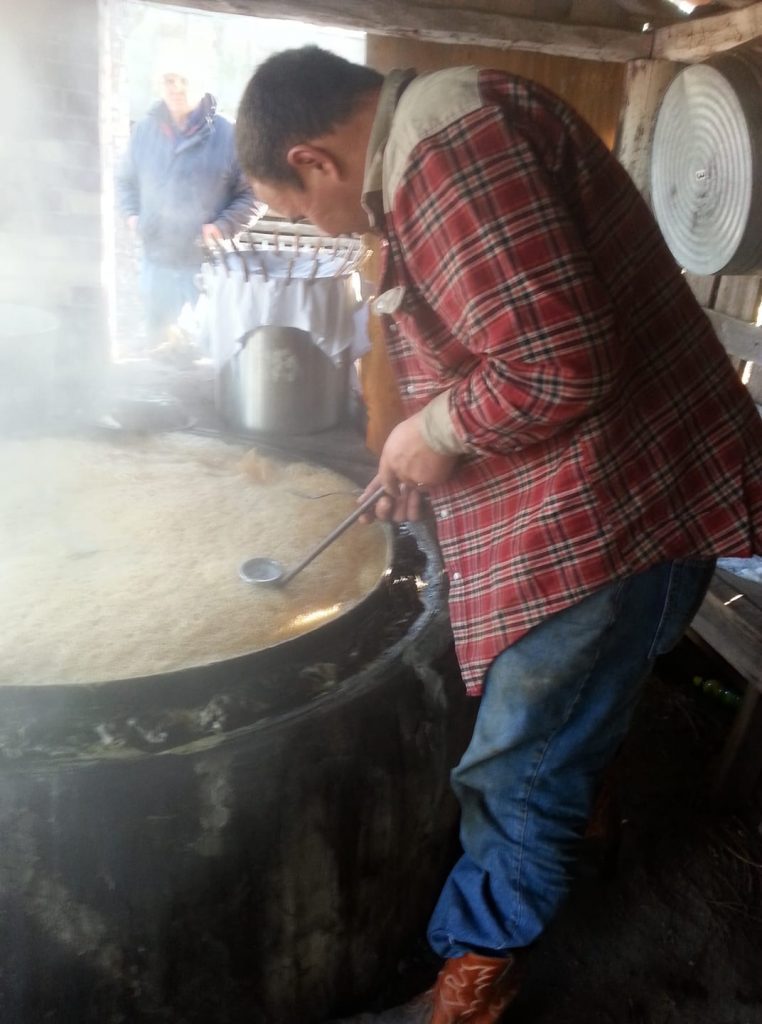 “In October, we would strip, top, cut and pile the cane and then cover it with the foliage. Not only did the cane seem to become sweeter, but this protected it from the frost. In November, it took us about two weeks to grind the cane and make syrup. We also made a bit of brown sugar. The sugar and part of the syrup were for our own use. The bulk of the syrup was shipped and sold. There is no way to estimate the vast amount of juice that was never converted into syrup. Papa always was generous with the juice and stalks of cane to all comers. This included the entire school every afternoon of cane grinding. I am not sure that I even thought about it at the time, but we just took for granted that everyone would go home with a stalk of cane, but first would drink as much juice as she or he wanted — catching it in cups as it flowed from the mill.

“The juice was squeezed from stalks of cane hand-fed between two great iron rollers as they were turned by a sweep (a de-barked pine tree) pulled around and around by two mules, Pete and Duck. Mr. Theiss usually presided at the furnace with its 80-gallon open boiler. I can see him now, skimming the bubbling syrup as it cooked and tasting it as it was almost done, as flakes of syrup would form and drop from his uplifted skimmer. When he decided it was just right, he would take a large dipper and prepare to dip the syrup from the boiler. Someone else would help him on the other side with another dipper. The two men would dip the viciously boiling golden syrup from the boiler. Mothers made sure their little children were far away from this job. As they poured each dipperful on the cloth strainer that covered the waiting container, someone else was pulling the fire from under the boiler with a long-tooth rake. Another was standing ready with a pitchfork well-filled with cane mash from the mill to push under the boiler to help cool it. 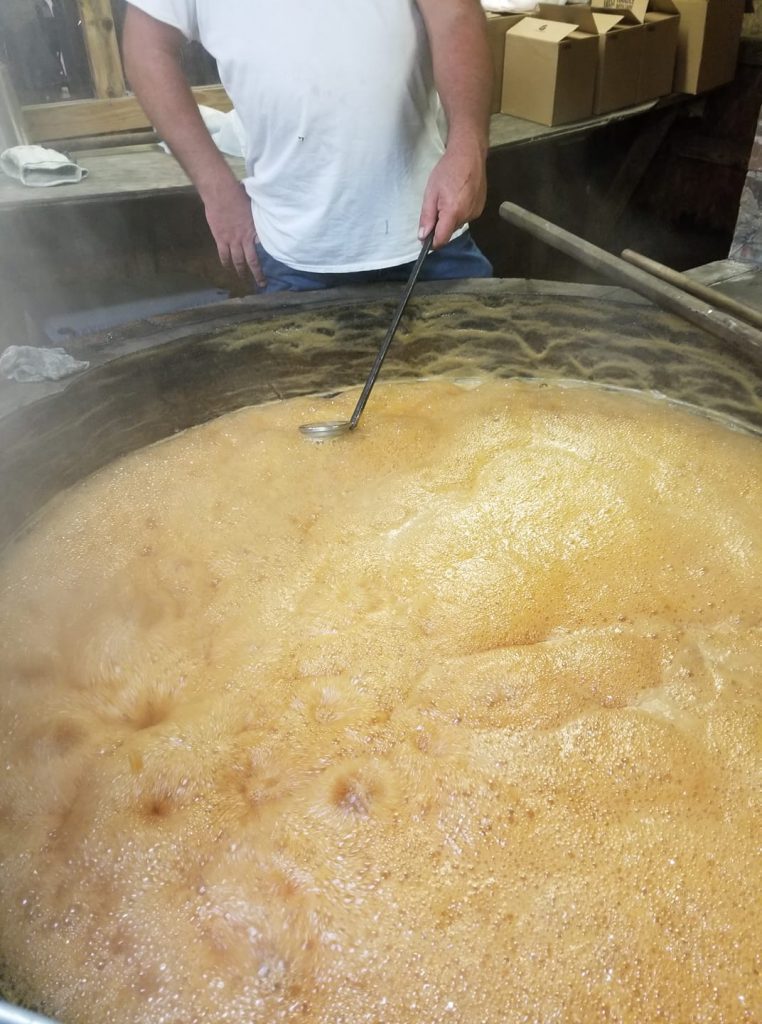 Those dipping would speed up as they came nearer the bottom of the boiler.

Two others stood ready with a galvanized tub full of juice — resting it on the 4-inch rim. Just at the right second, the signal would be shouted and the juice poured into the streaming boiler. If this was not done at just the right moment, the boiler would crack and be ruined. (It took about 55 gallons of juice to fill the boiler to the correct capacity. One large stalk would produce about a pint of juice.) This procedure was followed three times each day. (Just thinking about the above actions, one can see it takes six grown men at one time to perform the different jobs that have to be done at the precise time. Syrup making is not for a novice. It takes much skill and experience.)

“The last boiler at night would be partially cooked and skimmed and left until morning. The boiler was covered to keep the varmints out. The cooking was then completed as more cane was ground. Three “rounds” were cooked each day. Taking about four hours for each round, we finished about 10 o’clock at night. For cooling the boiler on Friday nights, water was substituted for juice. 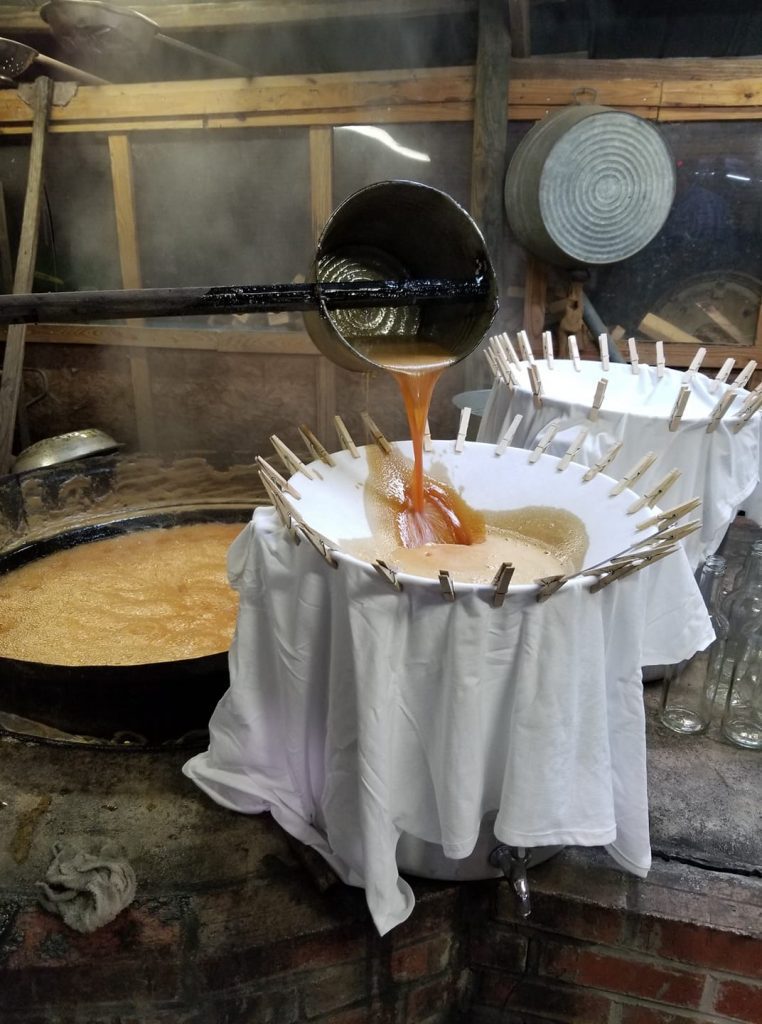 “Cane-grinding playtime for us boys of the town of Hinesville was in the afternoons after school, while the last round was cooking at night. The barn lot was large with many places to hide, so our favorite game was hide-and-seek. The lot was lighted well with the fire from the fire stand that stood by the furnace. Yes, sugar cane time was a great time of the year and I gained about 4 pounds each October and November. We all enjoyed the fellowship with many people, which was a natural by-product of cane grinding.
“The above cane-grinding took place many years ago at what is now the home of Olin and Peggy Fraser* at 208 E. Court St., just a few blocks from the Liberty County Courthouse. This home is on the National Register of Historic Places.” (Mr. Olin Fraser died Nov. 5, 2011.)

*The historic Bacon Fraser house was purchased from the Fraser family by the Liberty County Chamber of Commerce and Convention & Visitors Bureau in 2017. It now serves as their office space as well as being the welcome center for Liberty County.