Explore Liberty County, One Historical Marker at a Time

Founded in 1777, Liberty County has seen its share of events and important people that have left a mark, not only on our community but history itself. With heritage and history as deep and rich as ours, it should come as no surprise that we are home to 70 historical markers! We could spend all day telling you about each one and why we love the story it tells, but what better way to explore Liberty than discovering the stories found engraved on these historical markers? We put together a few markers and their locations to get you started and hope it entices you to find the rest scattered throughout our coastal paradise! 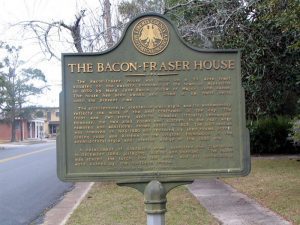 Built in 1839 by Mary Jane Hazzard Bacon, this home is typical of the time period and the only surviving house from Hinesville’s early settlement period. Several years after it was built, the home was saved by Mary Jane when she used her husband’s mason apron to prevent union troops from torching it during the Civil War. The home had remained in the same family for six generations until 2017 when it was purchased by us, the Liberty County Chamber of Commerce and Liberty County Convention and Visitors Bureau! 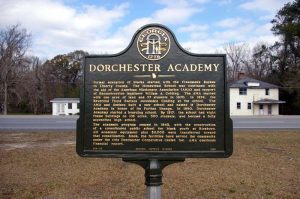 Dorchester Academy was founded in 1871 by the American Missionary Association as a school for freed slaves. Although the academic program ended in the 1940’s, the pioneering spirit did not. In the 1940’s the Dorchester Cooperative Center was established and Dorchester Academy became an institute for community development, political and social change. Nearly 20 years later, Dr. Martin Luther King Jr. and other key figures in the civil rights movement prepared for “Project C”, better known as the infamous Birmingham March here. Today, the Dorchester Academy serves as an African-American History Museum and Community Center. 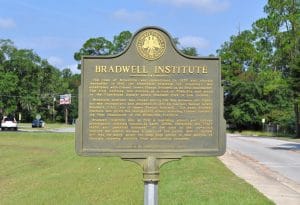 Originally know as the Hinesville Institute, Bradwell Institue was established in 1841, and stood on the Courthouse Square where Bradwell Park is now located. Hinesville Institute was closed during the War Between the States, but was later reopened by Captain Samuel Dowse Bradwell, son of the first headmaster, Colonel James Sharpe Bradwell in 1871. The name Bradwell Institue was given the reorganized school honoring Colonel Bradwell. Originally a boarding school, it became part of the public school system in the twentieth century, and was for many years the only high school in this section of Georgia. It is now one of two high schools in Liberty County, the other being Liberty County High School. 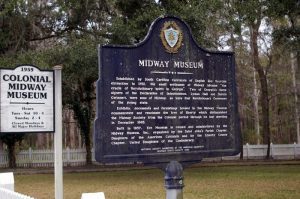 The Midway Museum was built in 1959 and is a reproduction of an 18th century plantation cottage. The Museum is set up as an early 18th century home would have been, and contains original furnishings, artwork, documents, jewelry, clothing, and artifacts. Since its founding, the Museum has received many 18th and 19th century family heirlooms, documents, books, genealogical lineages, and furnishings. It is a non-profit organization that survives only through the generosity of donors, plus the revenues from tours, special events, the gift shop, and event rentals.