Sometimes just a nice drive checking out your surroundings is what you need in life, and we have the perfect self-guided tour just for that! Flemington is one of the older cities in Liberty County and was once a summer retreat known as Gravel Hill for the early settlers of the Midway area. The Flemington Driving Tour is self-guided and takes you to 12 different historic locations to showcase the incredible architecture of this charming city. We have included the first 3 stops on this tour. Click here for the full list of locations!

The city of Flemington was chartered in 1941 by an act of the legislature of the State of Georgia. After many years of meeting in the social hall of the Flemington Presbyterian Church and storefront space in the World Trade Center, the City purchased the property in the photo below and renovated the structure. Once the renovations were completed approximately a year later, it became the home to the new City Hall in May of 2005. 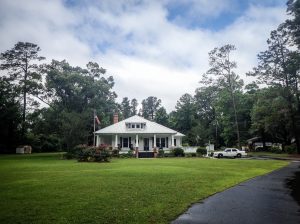 Gravel Hill or Graney’s Hill was settled prior to 1815. The settlement became a summer “retreat” and a church building was erected here in 1832 as a chapel of ease of the Midway Church. The name of the church and community changed to Flemington in 1850 in honor of William Fleming, the first settler, and is still active with regular services. 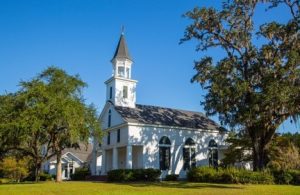