It’s the Most Wonderful Time of the Year

I love, love, love Christmas. It is hands down my favorite holiday of the year. I like that people are nicer and more cheerful; I like to give gifts, and I absolutely adore seeing the joy on the face of a child as he or she sees Santa walking down the street at our annual Christmas in the Park event.

However, I have also come to realize after celebrating year 14 of the Christmas Parade that not everyone shares my love of the best holiday ever! While it is hard for me to accept that I may be alone in my joyous need to buy presents for everyone I have ever met, bake cookies, obsessively fret about the placement of ornaments on the tree and look frantically for a natty red vest and antlers for Diesel (the Pitt Bull), I shall not let the Scrooges of the world impact my holiday cheer. 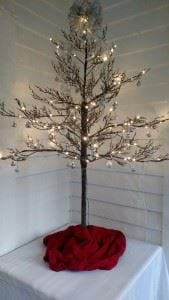 get me down! I honestly used to dread parade week and would speedily plan all my holiday shopping, decorating and traditions to happen before the first week of December because I knew that after the parade my interest in being jolly would significantly decrease due to increased workload, long nights and the frantic pace.

I’ve also had to learn that even when you are stressed, harried and running around like mad, your tone dictates the response you will receive. Trust me we all know that was a hard lesson for me. However, as an aside to that, it doesn’t matter what placating tone you take, if you’re telling someone “no” they are not going to be happy and while I personally dread telling people “no” sometimes it has to be done.

As I drove around the staging area for this year’s parade I sang Christmas carols, determined to not let my holiday spirit go. At one point my navigator, aka Amber, said “I really wish we had a radio on this cart.” To which she got the infamous Leah “look” and question, “What you don’t like my singing?”

Then we could laugh because I think I had been repeating the same verse to a song for about a half hour.

We always encourage people to join the parade committee, very few ever take us up on the offer, which I wish they would because then maybe they would see the time and effort that goes into the coordination of such a massive effort. And also maybe we would get new insight and ideas into something that for many of us has been a labor of love for years and years.

I have mad respect for whoever organizes the Macy’s Thanksgiving Day Parade, I would NOT want that job for any amount of money.

For me what makes each and every parade worth it (or at least for the last 9 years it has) is talking to my son afterwards and hearing some excited tale about “That big Transformer looking thing” or the horses, the candy, the colorful floats, the bands, etc. And then I remember the parade is worth any headache, angst and upset person if it means just one child saw something special and will cherish that memory for years to come. We are creating a piece of holiday memory for those future generations to look back on and know that their community cared enough to create such magic. That’s the place you want to come home to.

So a challenge to all the parade criticizers and those with creative ideas to share, join the committee to help us make it bigger and better, or continue with your private or public rants, whichever, for it truly is the most wonderful time of the year.

By: Roger Hutchinson, Chamber Board Chairman

The Christmas parade has come and gone and again it was a tremendous success.  I would like to thank Susan McCorkle, Leah Poole, Amanda Scott, Erin Johnson, Amber Barbaro, Mary Prince and Keturah Greene for their months of hard work in preparation for this event.  I would also like to thank the many Chamber Board Members and other volunteers who assisted in the preparation and execution. This event would not be possible without their active participation.

While many of you enjoyed the parade as a spectator or participant, I wonder how many have ever considered everything that goes into putting on such an extravagant event

To give you an idea, planning for the 2016 (which would be next year’s) Christmas parade started Monday with an after action meeting to discuss what went well, what went wrong and how we can improve things from this year.

We also solicited feedback from volunteers and will continue by sending surveys to participants so that each perspective can be considered.  Every suggestion and criticism is given legitimate thought by all concerned.  Naturally some of the suggestions are not within our resources or capabilities and some of things that are criticized are unfortunately unavoidable.   But our ultimate goal is to improve things every single year

Beginning in July 2016 planning sessions will begin! Things that will be discussed include: proposed parade routes, the staging area, coordinating with property owners and businesses that may be affected, reviewing budgets and a great deal of coordination with both city and county officials, emergency services and CH2M.

There is also television coverage to arrange for, as well as other media coverage, both to cover the event and to promote it. Parade permit applications have to be submitted for approval and meetings to have with safety officials. Flyers, entry applications and rules must be designed, printed and distributed to the widest audience possible.

Once the entries are finalized staff has to walk the approved route to ensure the route is safe and there are minimal obstacles to large vehicles or floats maneuvering.  This includes a staging area map where entries are placed in an organized manner to allow for safe placement within the staging area, but also to provide some variety in the type and order of entrants in the parade.

Progress in the planning of the parade is a topic of discussion at almost every monthly board of directors meeting.  During the latter part of the year, the committee members begin to meet more frequently, progressing from monthly to weekly meetings, not to mention the thousands of emails and telephone calls going on behind the scenes.  This is the final coordination phase, where everyone dots the I’s and crosses the t’s  to make sure all plans are as close to perfect as they can be and everyone has kept up with their commitments and responsibilities.

The week of the parade is the most significant challenge of the year for our chamber staff.  This is when all applications are finalized, the order of march is established and the layout of the staging area is completed.

Final coordination for traffic control, porta potties, television, crowd control, lights and job assignments for the volunteers occurs in this final week.  The Chamber and the Hinesville Police Dept conducts a mandatory safety briefing for all parade participants.  After this there are a hundreds more emails and phone calls with questions about something that has changed, was discussed at the safety meeting or clarification on a matter of concern.

Every year there are some people who come in during this last week, hoping to submit their entry application at the last minute.  As much as we hate to turn anyone away, we cannot accept any applications after the deadline and certainly not after the mandatory safety meeting.

The day of the parade is non-stop for the staff and most of the volunteers.  The reviewing stand and bleachers are put in place along with lights, scaffolding, cones/barricades and more.  Road intersections are blocked off at a predetermined time and staffed with volunteers.  Signs, banners and traffic cones are put into place.

Somewhere around 4:30pm the parade entrants start showing up, of course, they do not arrive in the order they are scheduled to appear in the parade.  If a vehicle is scheduled to be in the parade it is escorted by a volunteer to the assigned staging location and given further instructions.  If the vehicle is not in the parade it is diverted to pre-established parking areas.  For approximately 2 hours our volunteers are working as a team getting all parade entrants into place while attempting to avoid any major traffic jams or accidents.

Naturally, with an event of this size, many spectators and participants either forget or never got the word on key instructions for the parade. Our volunteers are always happy to assist anyone with questions, and this year we hoped we made it easier by having all of the volunteers in specially designed t-shirts for easy identification.

Once the parade starts our actions create what may appear to an outsider as total confusion, but trust me, we really do know what we are doing.  It’s sort of like the guy with a messy work bench or desk, it looks very unorganized, but he knows where everything is.  There is a lot of yelling and screaming into megaphones to get the participants moving into the parade flow, but with a couple thousand people involved and lots of contrasting loud music, sirens, bands and truck horns, yelling is really the only effective manner of communication.

While participants are enjoying the parade this work continues until the last unit/entry has crossed the start line.  Usually by this time the first entrants in the parade have finished and have arrived back at the staging area so we now face two way traffic, which adds to the perception of confusion.

Once the last unit has left the staging area our volunteers begin retrieving all of the traffic cones, signs, banners and other equipment and take it to our storage area.  Golf carts, ATV’s, other vehicles and radios are returned to whatever entity was kind enough to loan them to us.  Once all of our mess is cleaned up, our volunteers meet elsewhere for pizza and a small celebration of having made it through another year.

To tell the truth, I have never watched the Liberty County Christmas parade.  Most of our volunteers have never watched it either.  I know of one person who has worked with the parade for 14 years and has never seen the actual parade.  But that’s ok, because we enjoy what we do and have fun.

We enjoy seeing friends and associates, even though we don’t have much time to visit with them.  We enjoy the spirit that comes out of such an event and can see people when they are happy and enjoying themselves.  When we see that both participants and spectators are enjoying themselves, especially the children, we feel like we have done a great job.

I hope everyone who attended this year’s parade as a participant or spectator had a great time.  I know I did, and I am already looking forward to next year.