Posted on September 5, 2018 in News, The Right Blend Blog 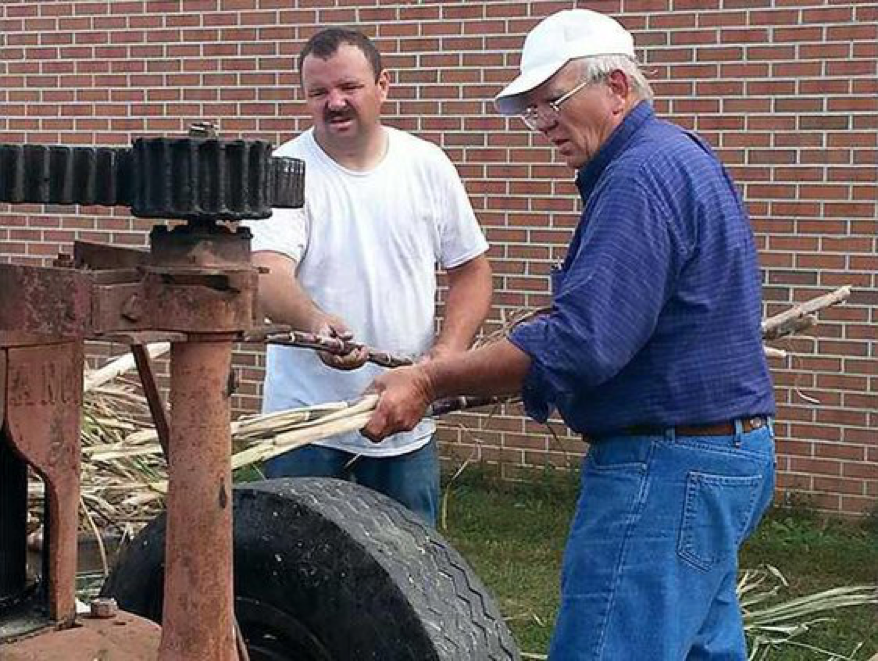 Years ago, almost every rural family had a ugar-cane mill and a boiler shelter. To make your syrup, cane had to be grown, gathered, the juice squeezed out and boiled. This was usually done during Thanksgiving vacation; by then, the weather was cool. No matter when it is done, there is a lot of hard work involved in the process. It starts before daylight and sometimes goes on into the night.

The whole community used to be involved when syrup cooking was going on. It was a great time for socializing and standing around smelling the fragrant smell of syrup cooking. And, of course, everyone stopped by to get just a sip of fresh-squeezed cane juice. Some even brought a gallon jug to be filled! Many stood around and watched until it was poured into the glass bottles and then asked for a free bottle. Not just anyone can be trusted with cooking syrup. Very few people even know how at this time. It is an ancient art that is fading away fast.

I want to introduce you to a young man who does not want this tradition to ever be forgotten. Steven Gordon, 38, is a native of rural Long County. He graduated from Bradwell Institute in 1996. In 2007, he married Trayce Corley from Glennville. He has two stepdaughters — Aryzonia, 24, is married and lives on Wilmington Island and Mayzie, 14, is still in school. Steven works with Fish and Wildlife on Fort Stewart, and his wife also works on post. Steven is the son of Charles and Linda Davis Gordon of Long County. Charles works with the Fort Stewart Forestry, and Linda has served 40 years with the Postal Service. She is the postmaster in Allenhurst for now, but will retire at the end of this month.

Steven spent much of his youth at the farm of his grandparents, James and Martha Altman Davis. The Long County Wildlife Festival began there. James liked history and tried to preserve the old country ways. Steven probably decided that he had better learn to like it, too, as his grandpa was going to force it into him one way or the other!

James had many little buildings on his property, such as the old school and little country church. He had a sawmill, which was more than 100 years old, that he used frequently. Steven said that when he was a teenager, he helped saw lumber every evening after school. As a matter of fact, he helped his grandpa build a 10-stall horse stable in the Gum Branch area. They sawed the lumber from trees on the property. My daughter and her husband own it now.

On Thanksgiving Day, there was hardly any room to park close to the James Davis house, as that was cane-grinding day, and everyone knew about it. Steven worked with his grandpa in making the syrup and asking questions. Grandpa taught Steven well, but he did not like to share his syrup-making secrets with the public!

James’ sawmill caught fire one day. The fire got down in the old mound of sawdust and kept burning. The roof over the sawmill fell in, and everything burned to pieces. Steven thinks his grandpa was so upset over losing his favorite piece of property that he died two days later on March 10, 2010, at the age of 84. Steven vowed to try to keep Grandpa’s history and love of preservation going on.

This is where Steven Gordon comes into the picture. Several years ago, Steven was at the fair and saw an elderly man cooking syrup under a shelter. He went over and began talking to the man and watching him. This went on for a long time. The man had been making the syrup for at least 30 years. Each year, Steven visited with the man. After his health began failing, the man asked Steven if he would be interested in taking over the operation each year for the Kiwanis Club. Steven was overwhelmed that the man would trust such a young person to do this job, which requires so much knowledge and work! Steven joyfully accepted.

Steven uses fat lighter wood to fuel the syrup boiler. On Monday, he cooks two rounds in order to have enough on hand to sell. The following days through Saturday night, one round is cooked and bottled. The boiler pot holds 60 gallons and takes about 4½ hours to make 6 to 8 gallons. His granddaddy’s boiler pot holds 80 gallons; one cooking produces 10 gallons. It takes 1,000 stalks of sugar cane to produce juice enough for the 80-gallon pot.

Steven does not put Karo corn syrup in his cane syrup. He likes the old-fashioned way of doing it. He would rather have his own grown cane, but he has turned all the fields into pasture land and has cows in it. Therefore, he has to buy the sugar cane he uses.

Sugar cane is a perennial, but the cane starts to lose its sweetness in about the third year, so one has to buy new seed and lay it down. Each section of a cane stalk has a little eye in it. Seed cane is simply fresh cut cane stalks laid end to end and buried. Each eye sends up a fresh stalk. Overlap them a little at the ends. Some people use nitrogen, but Mr. Lannie likes to use cottonseed meal to top-dress his cane.

Cane has to be cut before the first frost. Mr. Lannie usually does his syrup-making around Thanksgiving and makes 60 to 70 rounds a season. He puts corn syrup in his cane syrup. Some say this helps to preserve it better. Mr. Lannie’s cane stalks are usually around 12 feet tall. He probably has the largest cane patch in the state.

Thank you, Steven, for taking a great interest in preserving our heritage and trying to pass it along to other young people so the syrup-making art will not fade away!