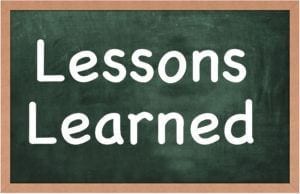 2016 marked the year of realizing things (really, that’s what Kylie Jenner said). I can’t attest for what Kylie “realized” this year, but I did learn a few things during the past twelve months. Since the end of the year is typically a time of self-reflection for many folks, I figured this would be a good topic for the last blog post of 2016. Here are my three big takeaways from this past year:

1. I don’t want a bunch of stuff anymore. Earlier in the year, I blogged about experimenting with minimalism. I would not consider myself a full-fledged minimalist, but I have cleared out a bunch of junk from my house and given away things that just aren’t useful to my family or me. The clutter had become overwhelming and now that a good bit of it is gone, I can focus on using and enjoying the things I love. I still have a way to go before I’m satisfied with the amount we’ve reduced, but this is a work in progress. I’m proud to say that I only have one junk drawer to go through now and one junky closet left. Many of the plastic storage boxes in our garage are now empty and that gives me a good feeling. I’m actually looking forward to doing some more major decluttering when I take some time off at the beginning of the New Year. This junk reducing has given me a feeling of more freedom in my house and I’ve learned that I can live with less.
2. If I’m going to make self-improvements, I need to write down my goals. I keep goals and dreams in my head and I think about them from time to time, but I don’t always actively work toward accomplishing them. The trouble is, there’s so much stuff clogged in my brain what with meetings, school obligations, work, family needs and more, I tend to forget what I should be working on for self-improvement. During this past year, I started keeping a journal in my purse. I’ve written everything in there that I need to remember from grocery lists to making doctors appointments, to paying bills, to weekend projects. While these things are not necessarily about self-improvement, I did see a great benefit in writing down even the smallest things I needed to accomplish, whether it was in a day, a week or a month. Wonder of wonders, I got things done! There’s not much that’s more satisfying than crossing something off a to-do list, after all! My plan for 2017 is to expand the journal to include life goals and keep it with me so that anytime I think of something I want or need to do, whether it’s small or large, I can write it down right then. I’ve learned that I have to be proactive whether the task or goal is large or small and writing it down with old-fashioned pen and paper keeps me on track better than anything else.
3. Life is messy and if something can go wrong, it probably will. I’ve known this for a while, but I guess now that I’m older; I can accept it a bit more easily. So many things have gone wrong this year, sometimes on a large scale. I had some grandiose plans for the Thanksgiving holiday, which I previously blogged about. Well, because life happens, NOTHING went as planned. Things happened that were disappointing and upsetting, but I had to make the best of the situation. That’s not to say we were miserable during Thanksgiving, but our family wasn’t able to be together like I hoped and other stuff just went wrong, wrong, wrong. That turkey that I was excited to make for Thanksgiving? It’s been sitting in my freezer for the last four weeks. I just roasted it yesterday and we ate it for an unceremonious dinner. But it was fine. I’m glad we were able to enjoy it as a family, even though the timing was off. My daughter is a true type-A personality, and she loses her mind when something doesn’t go exactly as planned. Having a kid that hyperventilates when you don’t put blocks away in the proper order has taught me to reprioritize what needs to be perfect and what can have some leeway. Nothing is ever going to be perfect and plans get messed up for no reason at all. That’s life. I’m trying to model for her and my son that something bad doesn’t have to ruin everything and to always search for something to be happy about. I’ve learned to do my best to let the bad go, adjust plans and move on.

I don’t think I did too badly in 2016. It probably wasn’t my best year, but I consider it successful if I’ve learned something and used that knowledge to make positive changes in my life. Here’s to taking on 2017 and whatever new challenges it holds.