Liberty’s LeConte Pear Was Once Famous

Driving down South Commerce Street, I saw a bushel of pears on the ground being crushed by passing cars. It reminded me of one fall many years ago when I was in grammar school. We did not have a pear tree on our farm, but we had neighbors who had plenty of them. They always gave us bushels of them when they ripened.

We hardly could wait for the time to pick pears from the trees. My mouth would almost water anticipating the delicious pear preserves that Mama would cook and can for us. Just before school started each year, Mama always made several batches of the best pear preserves I ever have tasted. School did not start on Aug. 1 back in 1953. Mama even added coconut to some of the preserves, which made them even better. The first days of school, she made sandwiches with those preserves for our lunches. Heck, we certainly did not know that pear preserves were supposed to be eaten a little at a time on toast.
Anyway, we did not have such fancy things as toast or bacon at our house. We had to eat those old homemade biscuits and fried sliced smoked ham from the smokehouse each morning. We could not splurge on such fancy food as a loaf of bread.

So, we grew up thinking that pear preserves were supposed to be made in late August just for school sandwiches. I wonder if I could talk Mama into making a few jars of pear preserves for me now. After all, she is almost 92 years old and doesn’t have too much to do these days.

Liberty County is famous for the LeConte pear. A few months ago, Kenny Smiley asked me if the LeConte pears were real or a figment of someone’s imagination. I convinced him that they were very real. In the early 1900s, there were hundreds of bushels of pears shipped from Liberty County each fall to the northern states. All the old farms had pear trees growing on them. There still are many today.

The LeConte pear is a dramatic chapter in the history of the botanical heritage of LeConte-Woodmanston Plantation. I found this written in 1978 by Mrs. Claude A. Black:

“About 1855, Maj. John Eatton LeConte purchased a seedling pear tree from Thomas Hogg, a famous plant hybridizer and nurseryman in New York. This seedling was found growing in a nursery that included specimens of the sand or Chinese pear (Pyrus seratina) and the French dessert pear. “A passage from Liberty Hyde Bailey’s Standard Cyclopedia of Horticulture sheds some light on Maj. LeConte’s motivation in purchasing the seedling. It is as follows: ‘Around 1850, the sand or Chinese pear tree was introduced into the eastern states. Although it attracted little attention, it soon hybridized with the common pear and a race of mongrel varieties was the result. Of these hybrids, only two have gained great commercial prominence, the LeConte and Kieffer.’ “The Chinese sand pear species had great vigor and produced large yields of fruit. but the quality of the fruit was unacceptably poor, coarse of texture and flat in flavor. On the other hand, French dessert pears produced fruit prized by gourmets. But the tree was lacking in vigor and low in yield. Maj. LeConte hoped the hybrid seedling he purchased from Hogg would represent a fortuitous or lucky gene combination embodying the best characteristics of both parent trees. It did.

“Maj. LeConte sent the seedling pear to his niece, Jane LeConte Harden, then widowed and living at Halifax House on her portion of Woodmanston lands in the Riceboro vicinity. About the time the seedling came into bearing, the War Between the States intervened and little attention was paid to it until 1866. Then Leander Lewis Varnedoe, ex-colonel, CSA, and one-time superintendent of Jane’s lands, picks up the story. “In an interview with Henry Grady, April 16, 1882, Varnedoe stated: ‘In 1866, when I returned from the war, the tree had grown into a handsome tree and was loaded with the most delicious fruit. When I came to Thomas County, I brought some cuttings from the tree. I planted these and those superb trees are the results.’

“The history of the Southern pear industry began with the introduction of the LeConte Pear tree into Thomasville in the early 1870s. At one time, it was conservatively stated there were at least 200,000 trees in Thomas County. Great prices were received, the growers in those days getting from $3 to $7 per bushel. The LeConte and Kieffer pear industry extended from Thomas County all along South Georgia to include Liberty County. “Miss Eliza Martin, who owned and lived on the John Martin Plantation in Flemington, had many LeConte and Kieffer pear orchards.

“Bailey concludes the story of the pear industry in South Georgia by saying: ‘Because of the blight and lack of care, with no systemized methods of marketing, the pear industry in southern states fell into a low ebb around 1916.’ Danny Norman’s great grandfather, Judge John LeConte Harden, lived on Tea Grove Plantation in Walthourville village and built the house in 1877 that Norman lives in today. In the judge’s journal he kept religiously, he recorded on Feb. 22, 1872, he set out 10 pear trees that cost $10, labor to set them out was 50 cents and the manure put around them was worth $2. In August 1872, he paid someone to sell three pecks of LeConte pears for 75 cents per peck. 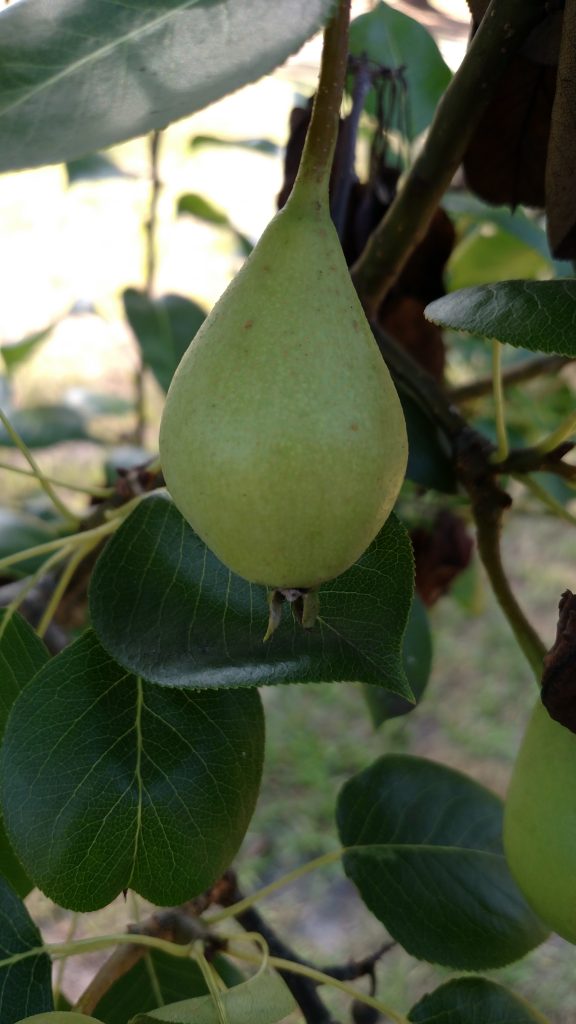 There is a small book in the local library in the reference section that uses facts mixed with fiction that tells a beautiful tale about the LeConte pear tree and how it got to be so plentiful in Thomas County. It is “Louisa — A Southern Girl’s Escape in 1864,” written by Elizabeth Bowne in 1995. The author is a descendant of Leander L. Varnedoe who owned Liberty Hall Plantation before the war. He sold the plantation for a fraction of its value and used the money to expand his pear orchards near Thomasville.

Now, that you know all about the history of the LeConte pears, perhaps you would like to try your hand at making some delicious preserves. Toast will do to eat with them, but some home-baked golden-brown piping-hot biscuits would be better.