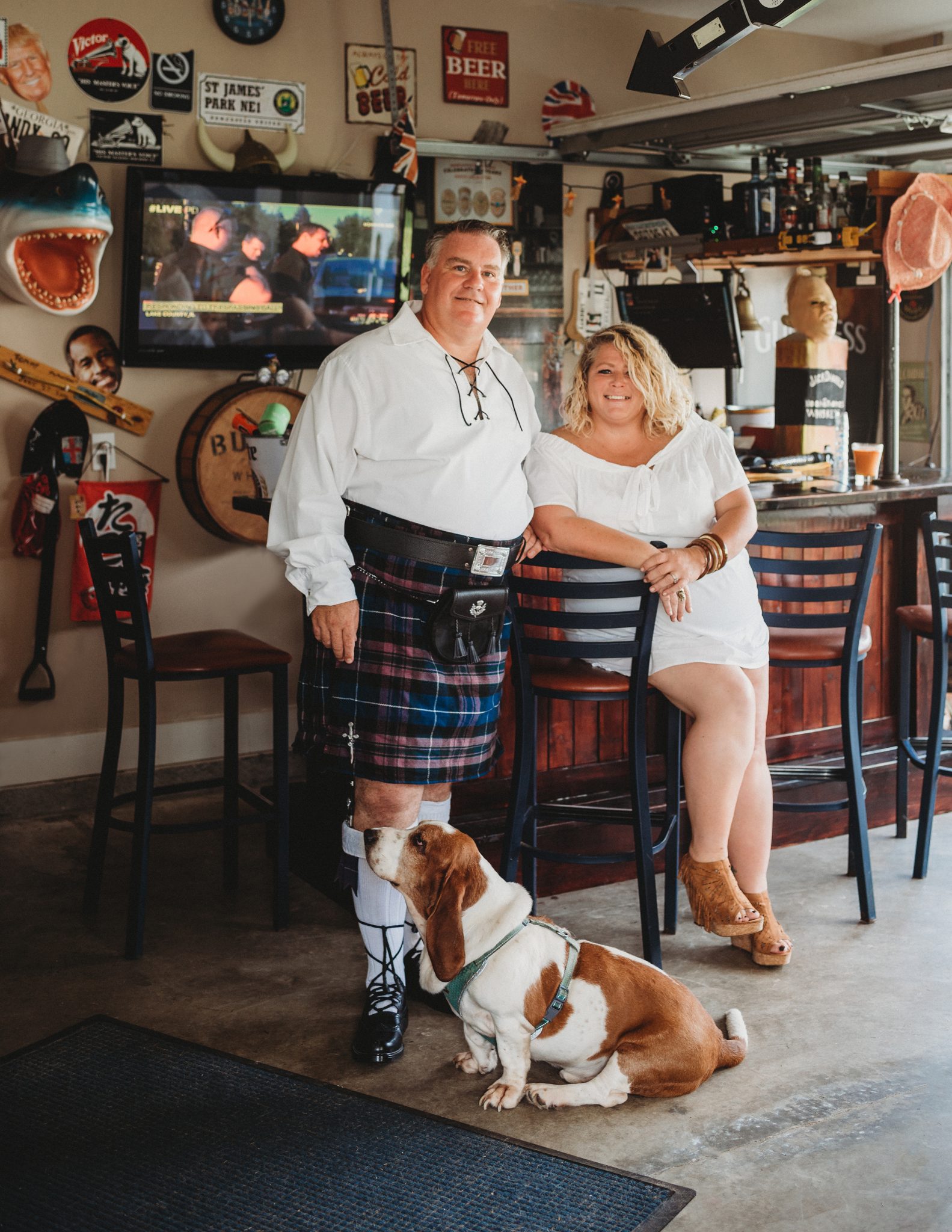 If you have ever found yourself in the same room with Lillian and Andy Gray, you would know it immediately. They would be the couple, hands down, everyone in the room would gravitate towards. Lillian’s infectious laughter combined with Andy’s dry wit make them the dynamic duo they so perfectly are today.

The story of their meeting is one that can best be described by using the age-old adage that something is simply “meant to be.”

Both made their way to Liberty County by way of Fort Stewart. Lillian an Army brat whose father was stationed on the base with the 24th Infantry Division. Andy arrived to the base for a mechanic contract all the way from Scotland. The pair first met briefly in 2003 when Andy happened to walk in to the restaurant where Lillian was bartending, but a later encounter would be the meeting that catapulted their relationship.

Although the pair had overlapping circles of friends, they didn’t truly get to know each other until one night at a small saloon named Gilly’s while listening to a band named South Paw. Their social circles just so happened to overlap bringing Lillian and Andy together. After some playful flirting and ice cube throwing, Lillian bought Andy a beer. As the first woman to do so, Andy was definitely taken by the act and promptly leaned over to his friend saying “I’m going to marry her.”

Each brought something special to the relationship; along with Lillian came her son Tommy, and Andy his daughter Emily. All of a sudden there was no longer a budding relationship but a blended family. “Andy was the best thing that could have happened to Tommy and me,” said Lillian.

As the idea of marriage began creeping into the picture, Andy learned it might be more of a challenge that he initially thought. Lillian, who had no intentions of remarrying, informed him she’d only marry him when “hell froze over.” To top it off, upon asking her son Tommy for his blessing he was swindled out of a big screen tv, a Superman blanket and a very large fluffy pillow. As Andy recalls the story though, “It was all worth it in the end.”

The swindling of her teenage son would all be worth it once Andy proposed. On February 12, 2009 at a local seafood restaurant, Andy took a leap of faith and asked Lillian to marry him. Fate was definitely on his side that day, as the union must have been meant to be. It would just so happen that on this very same day that Andy took a chance and asked Lillian to be his wife, it snowed for the first time in 20 years in coastal Georgia, and hasn’t since. It may not be hell freezing over, but it’s pretty close. Naturally Lillian said “yes!” They were married at the smallest church in America surrounded by friends and family.

Lillian and Andy have built an exciting life in Liberty County and spend much of their free time attending and participating in community events. Influential volunteers in the community, the pair spend much of their time participating in organizations that give back to the community. “We’ve received so much love and support from this community and want to be a part of giving back,” said Lillian of their desire to volunteer. She is currently in her 3rd year as a Keep Liberty Beautiful board member and actively participates in the Liberty County Chamber of Commerce. “The information and opportunities the Chamber affords not only its members, but our citizens is immeasurable,” explained Lillian on their desire to be so involved with Andy adding, “We have both made friends through the Chamber and CVB events.”

When they’re not at their day jobs or volunteering Lillian and Andy make the most of their time together. The pair have a zest for life most people would love to share. While the couple may spend much of their free time at home under the pergola Andy built by hand, an 18 hour road trip up the Atlantic Coast to dine on Maine lobster is just one example of how Lillian and Andy live life to the fullest. The occasional swing on the front porch of the Bacon Fraser house in downtown Hinesville is a favorite spot to relax, too!

Coming together from different continents, across an ocean and bringing snow to southern Georgia are feats that only true love could accomplish. Lillian and Andy’s love story is one that is just simply meant to be. 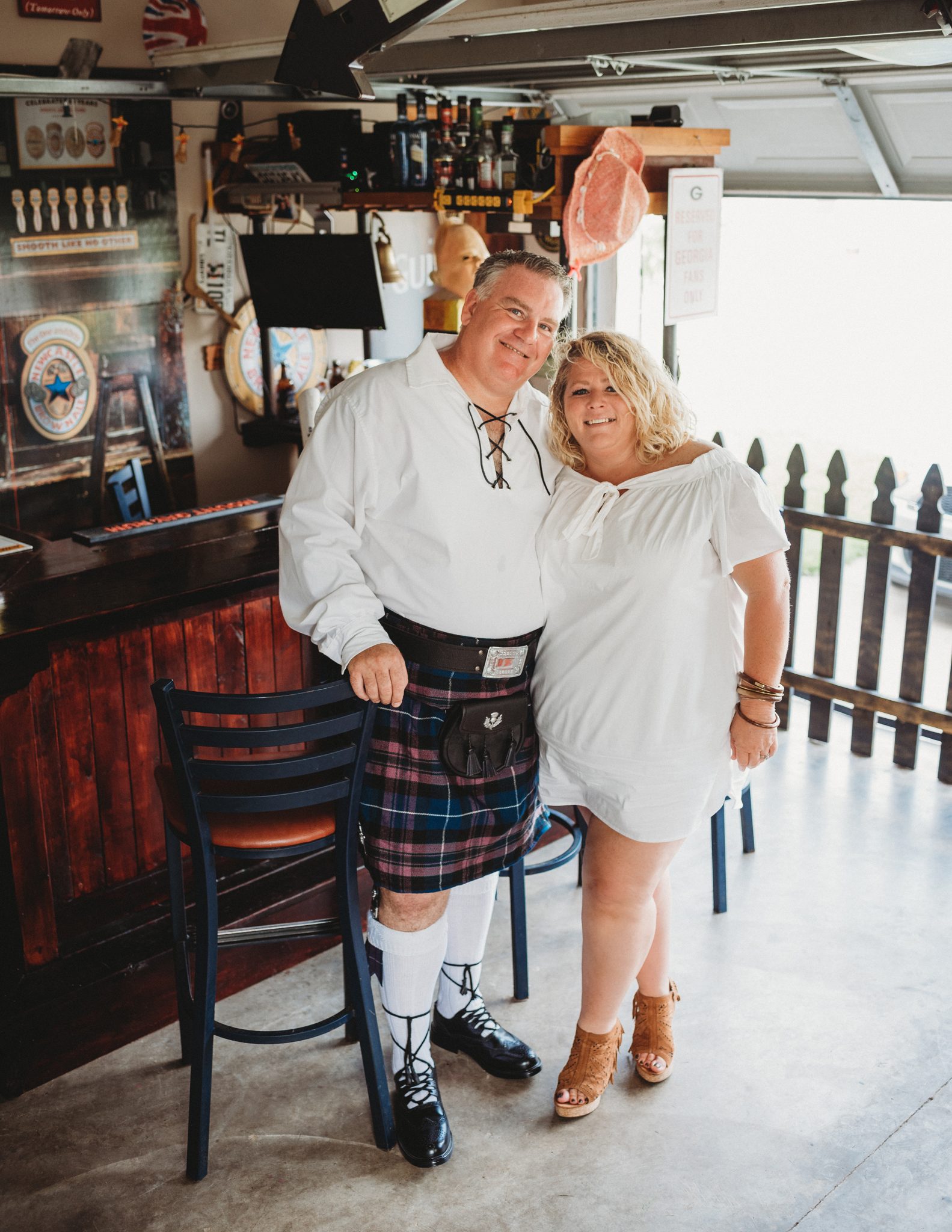