My Love/Hate Relationship with The Walking Dead 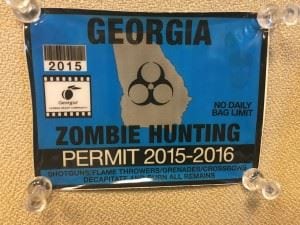 I’ve been watching The Walking Dead, which I will subsequently refer to as TWD (due to sheer laziness) since Season 1. It’s not that I particularly enjoy seeing the gore and violence. I enjoy the drama, the action and the relationships between the characters. These people were forced into a post-apocalyptic world, and the consequences for some of their actions mean life or death on a daily basis. Trust the wrong person? Dead. Wrong place at the wrong time? Dead. Get sick and no antibiotics? Dead. Life is tough without the luxuries we’ve grown accustomed to. I like to speculate how I’d handle living in a world like this. I’d be totally fine if I could live in a place like Alexandria, with electricity and coffee. Tramping through the woods with no shower available? No, thanks! Most of us at the office regularly watch TWD, and we typically have a discussion sometime on Monday about the previous night’s episode. It’s an interesting series, and everyone has her own take on the show.

Lots of folks are angry about the season 6 finale, and I include myself in that group. I watched Rick and his posse drive around the entire episode, make dumb decisions and then get caught by Negan. Then Negan gave, in my opinion, a very overly dramatized speech that had the gang shaking in their boots. Then the screen went blank, and we have no idea who died. What I’m most irritated about is that nothing really happened in this episode. I gotta say, the introduction of Negan didn’t frighten me at all. I was just happy that SOMETHING was about to happen. But nothing happened. That’s what bothers me. If I wanted to watch people drive around in circles, I would tune into a NASCAR race. I consider almost every season finale a cliffhanger of sorts because they have to leave you wanting more or else you won’t tune in next season. I don’t know what AMC was trying to accomplish by not showing who died. Don’t get me wrong, I didn’t want to see the actual beating, I just want to know who needs to be buried. One of my favorite characters from Game of Thrones “died” on the season finale last year, and somehow I’ve managed to survive. And yes, I’ll watch the season premiere of Game of Thrones on April 24th. Viewers can handle the grief, and they’ll still come back for the season premiere if they’re really invested in the show.

Here’s another thing that bothers me. Why do Rick and company still make so many bad decisions this far in? When someone voluntarily walks out of your safe haven, you should probably say, “goodbye and good luck,” instead of bringing your strongest people out to go find him/her, and leaving the rest of your group practically defenseless. I’m rooting for our heroes, but honestly, they create so many problems for themselves it has become ridiculous. I know the writers have to create this drama, but do they think this is how people would react in the real world?

TWD films in Georgia, which is pretty awesome! I kind of feel obligated to watch it for that reason alone. Even still, I’m invested in the show, and I’ve enjoyed seeing how the characters have changed and grown over the seasons. I enjoy the villains too, strange as that may sound. The Governor was a great villain, and although I wanted him to die, I was actually a little sad when it happened. I also like character-centric episodes where you dig a little deeper into someone’s psyche and backstory. I think they could expand on that a bit more, and create some very interesting episodes. I’m irritated with TWD, but it’s a long summer, so I’m sure I’ll get over it by the time the show starts again.

Maybe those writers are cleverer than I thought. Closing the finale episode abruptly forces the audience to “just survive somehow.” I’ll be on my couch watching the season 7 premier. Hey, I can’t just abandon my relationship with TWD over one bad decision. After all, in the fall, it’s the love of my TV life.