Satan Is Really Her Name… 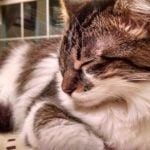 So National Pet Day was this week. On the 11th to be precise, and it inspired me to tell the story of how our pets came to be a part of our family. We started innocently with a cat, who turned out to be Satan incarnate. And you’d be hard pressed to find anyone who would disagree with her name change.

When Gabe (my son) turned 6 he decided he wanted a pet. Our townhome would only allow for cats so that is what we elected to get. I took him to a cat adoption event at PetSense for Carpathia Paws (local animal rescue) and let him pick the one he wanted. Big mistake.

He chose Sunny. That WAS her name. She’s gorgeous, a long haired beauty. He promptly renamed her Rocky because she kinda looks like a rock in her coloring. It only took a few days to know that was also not her true name. Within a week I was messaging friends with cats to ask if their cats attacked their feet. My well-meaning friend (cough, cough Maryann) told me that “love bites” from your cat are normal. So I figured she just really liked us. I did rename her unintentionally during one of these biting jags and started calling her Satan and the name stuck.

Then we moved into a new house and got a lab (Cooper), also from Carpathia Paws. She became even more mean, biting random people, scratching and hissing at the dog and basically just being a nuisance. However, we all co-existed peacefully for over a year, with little bloodshed. Her name remained Satan though.

Then we got a pitbull (Diesel), also from Carpathia Paws. The rest is history. Satan decided that two dogs was two too many. She took to peeing on the rug in front of the fireplace until we got rid of it. Not sure in cat language if that was a big screw you or what? So when the rug was gone my thought was she would be out of things to pee on other than her litter. My mistake.

Apparently not having the rug to pee on and adding dog #2 to her household mix pushed her over the feline ledge. Her recourse was to begin peeing in the dog’s water bowls. What this requires from a cat is standing in the water. Which they supposedly hate. She obviously hates the dogs more than the water. I caught her, all four feet in, peeing in Cooper’s water bowl.

Satan has since become an outside cat. She is much happier. The dogs are much happier (pee water probably tastes terrible) and life is normal again, or at least as much as having a cat named Satan can be. She now prowls the yard killing lizards, frogs, tormenting moths and bringing us the occasional snake (minus his head).

She’s scary. Most people are scared. Don’t let the little minx fool you, she’s a master of disguise.