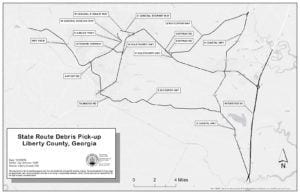 We were notified yesterday that GDOT has hired a debris contractor to pick up debris that is on all state roads, as well as the leaners and hangers over the roadways.

Because of this, the state will no longer pay the City/County their match to clear state roads.

Effective December 8, 2016, the City and the County have discontinued debris pickup on all state roads.