The Liberty County Chamber of Commerce has close to 500 AMAZING members. They add a great amount of value to Liberty County and the surrounding area. Each member brings something special to our chamber family, and we want to take time to highlight our members by telling their stories. Our non-profit members are just as important to us as our regular business members. Liberty County non-profits do a lot of good work in our community, and we are happy to highlight the Hinesville-Fort Stewart Shrine Club!

Who are you and what is your business?

For this particular blog we chatted with Roger Hutchinson, Secretary of the Hinesville/Fort Stewart Shrine Club.

Why was the Shrine Club created in Liberty County?

Members of Hinesville Masonic Lodge created the Shrine Club according to Hutchinson. The Shrine Club was originally created as a more flexible & social way for Mason’s to interact. Shriners eventually became a much more philanthropic organization with a mission to help children and families in medical crisis. Specifically, they support 22 hospitals in the US and Mexico. Their fundraising efforts allow children, regardless of their families’ ability to pay, to receive top notch pediatric medical care. Each Shrine Center even has a unit dedicated to transporting children to the hospitals as well. 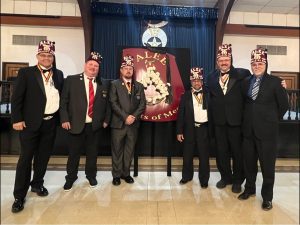 What brought you to Liberty County?

Members of the Hinesville Masonic Lodge formed the Hinesville Ft Stewart Shrine club 50 years ago this year! Hutchinson said that the local members are excited to celebrate this milestone with a big dinner in August. Prior to that local Shriners attended meetings and functions at either the Savannah Shrine Center or the Red Fez Shrine Club in Darien, Georgia.  The founding members established the club in Hinesville to expand the functions, visibility, and benefits of the organization to their hometown.

What’s an interesting fact that most people don’t know?

Hutchinson said that something most folks may not realize is that 70% of their local members are actually military retirees. Hinesville-Fort Stewart Shrine Club is the only club in the world, affiliated with a military installation. Another little-known fact is that, you must be a Mason to be a Shriner; then you are invited to join the brotherhood.

According to their website, “Shriners International is a fraternity based on fun, fellowship and the Masonic principles of brotherly love, relief and truth. Having nearly 200 local chapters and thousands of clubs on six continents; Shriners are known for their fellowship, brotherhood, compassion and generosity. The fraternity established Shriners Hospitals for Children as its official philanthropy in 1922, and continues to support it today, while striving to make the world a happier, better place.” 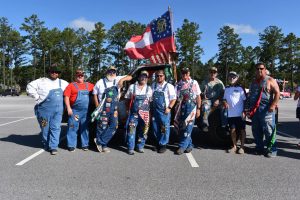 What are some of the fundraisers that the Hinesville/Fort Stewart Shrine Club do?

Hutchinson said that the local club does a Pumpkin Patch, which this year will be on Saturday, October 15th at Bryant Commons in Hinesville. Started by Jimmy Shanken 9 years ago, this has become their biggest local fundraiser. Regionally, the Shriners have a haunted house in Savannah, every weekend during the whole month of October. For the past 2 years their hunted house has remained ranked #2 in the sate.

What value has the Shrine Club gotten out of their Chamber membership?

Hutchinson said that the local club receives a lot of benefits from their Chamber membership, specifically through marketing their various events on things like the table tents, social media, flyer design and more! He also mentioned the Christmas Parade that the Chamber does each year and the fact that many surrounding units of the Shrine Family participate in the parade.  Everyone knows that Shriners love parades!

How can people get in touch with y’all?

“To get in touch you can always reach out to myself or Jimmy Shanken,” said Hutchinson. Also he referenced reaching out to them on their Facebook page.