The First Time I Got Called Old 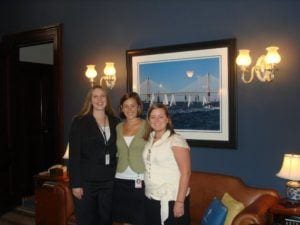 We celebrated my daughter’s sixth birthday a couple of weeks ago, and age was a topic of discussion with both sets of her grandparents in attendance. We went to lunch with my parents before they left to go home on a Sunday, and my daughter turned to her grandmother to tell her she’s old. My mom said yes, and that she didn’t mind being called old, but some people don’t like to be called old, and she should be careful to whom she says this. My daughter also compared my mother and me and said that I don’t have as many wrinkles as she does. Sorry mom, but yay for me. The birthday celebration and getting older made me think about a conversation I had many years back that ended up being the first time I was called old.

I was twenty-six. In my life pre-Liberty County, part of my duties at the office in which I worked entailed being the intern coordinator. So glamorous, I know. Reviewing applications, interviewing, hiring, training (yes, even firing a couple) and writing recommendation letters all came along with the task in addition to my actual job. I really had no idea what I was getting into when they asked if I’d take on that responsibility, but it was good life experience. There is one particular intern I’ll never forget and here’s why. One day we were having a casual conversation about TV shows. He mentioned that “Dawson’s Creek” was one of the shows he watched regularly in high school. I told him that I never watched it, I watched “Beverly Hills 90210” (no, not that sloppy remake, the original). He then replied with, “Yeah, but you’re like, really old.” WHAT!?!?! I repeat, I was TWENTY-SIX at the time. He was twenty-one.

Although I was tempted to fire him on the spot, I refrained, internally cursed him and laughed it off. In truth, I was shocked that someone would call me old. Up until that point, I considered myself to be like a wise 18-year-old. I was married at the time, but we didn’t have kids, so I doubt I had the mom vibe going on. I have relived that moment in my mind so many times. I don’t know why, but it was just something that stuck with me. I think about him whenever a conversation about age comes up, and I wonder what he’s doing now. He would be in his thirties after all, and well past the age in which he considered me old. I often wonder if he remembers that conversation and if so, was it triggered because someone called him old? I can only hope.

Still, I try not to let age define me. Aging happens whether we like it or not, and I’d rather get older than face the alternative. Would I like to be young again? No, I’d like to feel young again. I’d even take my “old” 26-year-old self, but I wouldn’t trade all the experiences and knowledge I’ve gained along the way. Aging is a challenge, and I expect the trials to increase the older I get. For now, I’m happy that I’ve made it this far in life, and my life is good. I figure I’m “up to about B+” as my dad would say.

So the next time you’re feeling old, just remember that yours truly has been old since the age of twenty-six, and it’s not as bad as you think.