We recently held a tea party of sorts at the Liberty County Chamber and Convention and Visitors Bureau offices. It wasn’t formal and we didn’t use good china or cloth napkins. We did get to taste eight different teas to narrow the selection for a Liberty County tea blend. Of course, none of us are expert tea-tasters but we are from the south and that gives us credit right there.

There were black teas, fruity teas and nutty teas and in the end, we narrowed it down to three. There will be another round of tea tasting soon to select the final blend to reflect Liberty County and the rich history of would-be tea plantations.

Many a southerner grew up on sweet iced tea and its ability to quench thirst and the soul simultaneously. The best kind of tea as any local can tell you is a strong blend with just the right amount of sugar served over ice. No nonsense and no fuss, no muss. Tea that refreshes the body and mind. Yep, we’re passionate about tea in the south. What better way to wile away the sticky, steaming, languid summers than a tall frosty glass of iced tea?

Here in Liberty County, the soil is perfect for tea and if it hadn’t been for a financial deal that fell through to South Carolina, Liberty County would have been producing tea for the states in the 1800s.

It all goes back to Riceboro and the first tea plants introduced there by William Jones and his daughter, Rosa Jones Screven. A Scottish venture capitalist named John Jackson visited Liberty County to inspect the tea crop. The specimens he sent to the Department of Agriculture were deemed equal the best raised in India or China.

A $30,000 appropriation to establish a government sponsored tea project in Liberty County was secured but the political tides turned the project went to South Carolina. Jackson had no choice but to follow the money and go to Summerville, South Carolina to tend to the crops.

After a year of cultivation, he was convinced South Carolina’s soil was wrong and Liberty County was the best choice to grow a perfect tea crop. Unfortunately, since the tea didn’t take in South Carolina, the government funding was relinquished and Jackson had to abandon his tea aspirations.

History is dotted throughout Liberty County along the highways, main streets and dirt roads. Not too long ago, we took an excursion through our lovely Liberty County and we stopped to visit with a few of our many historic and cultural sites. The destinations along the way are only a few examples of the history mosaic that makes up Liberty County. 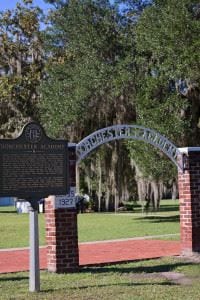 Dorchester Academy, a notable site on the National Register of Historic Places was founded after the Civil War to teach African American youth. It also served as a haven for Dr. Martin Luther King, Jr. as he prepared for the 1963 march on Birmingham. Indeed, it seems only appropriate that Dr. King should find respite in a land named Liberty. The room where he stayed is preserved and stands as a meaningful moment in time.

Past the school lie the wonders of Cay Creek Wetlands Interpretive Center. It is abundant with plant life and rich soil, the type that John Jackson believed was perfect for cultivating exceptional tea plants. Six different ecosystems are represented here and in addition to the diverse flora and fauna, history makes its mark as well. If you look closely, you’ll find earthen berms that are the remains of dikes once used to hold water onto flooded fields used for growing rice. 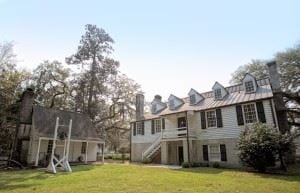 Back of the Midway Museum

Moving further through the county will bring you to the Midway Museum, Georgia’s only Colonial Museum. Treasures and artifacts are placed throughout the colonial style plantation cottage and interpreters relay the stories of the prominent members of Liberty County who made historic contributions locally and nationally. Built in 1756, burned during the Revolutionary War and rebuilt in 1792, the Midway Church sits on the museum property and watches over the cemetery across the street where  Revolutionary War Generals James Screven and James Stewart are laid to rest.

In Riceboro, you’ll find the Geechee Kunda Cultural Center. An interpretive center dedicated to preserving the Gullah Geechee heritage and educating visitors. The museum holds original relics from the days of slavery and tools used to harvest crops. They have turned what was once a rice plantation where their people were enslaved into a celebration of heritage and education. Annual events like the Sugar Cane Grinding and The Gathering exhibit the art, history and stories of this nation of people.

The motto of Seabrook Village is “Makin Do” and it is yet another stop on the historic journey. The authentic site provides demonstrations of how some of the first freed slaves in Liberty County used their ingenuity and talents to create a small village that exemplified hope and liberty. Visitors today can participate in demonstrations from the old way of life and immerse themselves in the folklore and legacy of a time

Liberty County has pristine coastal views in several locations, including Sunbury, a once bustling Pre-Revolutionary War town with a port that rivaled Savannah. The town was protected by Fort Morris, where the original earthworks of the fort remain. Sunbury and Fort Morris were conquered by the British and today, Sunbury sleeps. There are homes clustered near the marvelous water views and the peaceful Sunbury Cemetery where some of the town’s founders are interned. It’s a tranquil place to sit on the dock and soak in the view. Our journey concluded in Sunbury with a gorgeous view of the coast. 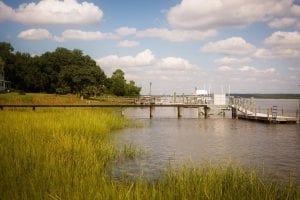 The Docks at Sunbury

The intriguing history of tea in Liberty County and the sites mentioned are just a fragment of the discoveries to be made here. We’re bringing tea back to Liberty County to carry on the hopes of John Jackson. We’re searching to find a tea that’s just right to celebrate the history of the area and the devotion southerners have to their house wine.

To learn more about Liberty County’s culture, history and attractions or to plan your next trip to our coastal hideaway, call 912-368-3580. There is so much to do and see in Liberty County. Let us take you there.