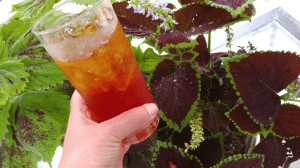 Southerners grow up drinking sweet tea. The ability of the ice-cold beverage to quench their thirst, especially on those sticky hot summer days cannot be beaten! Ask any local what the best type of tea is and they will tell you that it is a strong blend with just the right amount of sugar, served over ice. We’re passionate about tea in the South.

Here in Liberty County, the soil is perfect for tea and if it hadn’t been for a financial deal that fell through Liberty County would have continued producing tea for the states well into the 1800s and beyond.

It all goes back to Riceboro and the first tea plants introduced there by William Jones and his daughter, Rosa Jones Screven. A Scottish venture capitalist named John Jackson visited Liberty County to inspect the tea crop. The specimens he sent to the Department of Agriculture were deemed equal to the best raised in India or China.

A $30,000 appropriation to establish a government-sponsored tea project in Liberty County was secured but the political tides turned and the project went to South Carolina. Jackson had no choice but to follow the money and go to Summerville, South Carolina to tend to the crops.

After a year of cultivation, he has convinced South Carolina’s soil was wrong and Liberty County was the best choice to grow a perfect tea crop. Unfortunately, since the tea didn’t take in South Carolina, the government funding was relinquished and Jackson had to abandon his tea aspirations.

The intriguing history of tea in Liberty County is just a fragment of the discoveries to be made here. We’re bringing tea back to Liberty County to carry on the hopes of John Jackson. We’re searching to find a tea that’s just right to celebrate the history of the area and the devotion southerners have to their house wine.

The tea plants cultivated by Jackson are no longer in existence in Liberty County but the soil in these parts holds the memory of his dream. The blended culture and history of our lovely Liberty County await discovery.