The Voting Rights Act and The Role Played by Dorchester Academy

Today, many people take the right to vote for granted, and fail to remember the steps that had to be taken for women and African Americans to be given this right. Although the 15th Amendment, passed in 1870, technically granted African Americans suffrage by declaring, “The right of citizens of the United States to vote shall not be denied or abridged by the United States or by any State on account of race, color, or previous condition of servitude,” many states employed discriminatory practices to work around the Amendment.

The Voting Rights Act was signed into law on August 6, 1965, by President Lyndon B. Johnson. The act aimed to overcome all legal barriers at the state and local levels that denied African Americans the right to vote. From poll taxes to literacy and citizenship tests, it took nearly a century before African Americans were actually allowed to exercise this freedom.

Here in Liberty County, Dorchester Academy helped educate African American citizens in how to pass the tests put in place to prevent voting. This “College of Liberty County,” as it was called, enabled and ensured freedom of the mind to thousands of people in southeast Georgia. Dorchester Academy nurtured unquestionable leadership that eventually challenged the illegal voting tests through education, enabling thousands of minorities to pass the test so they could vote. 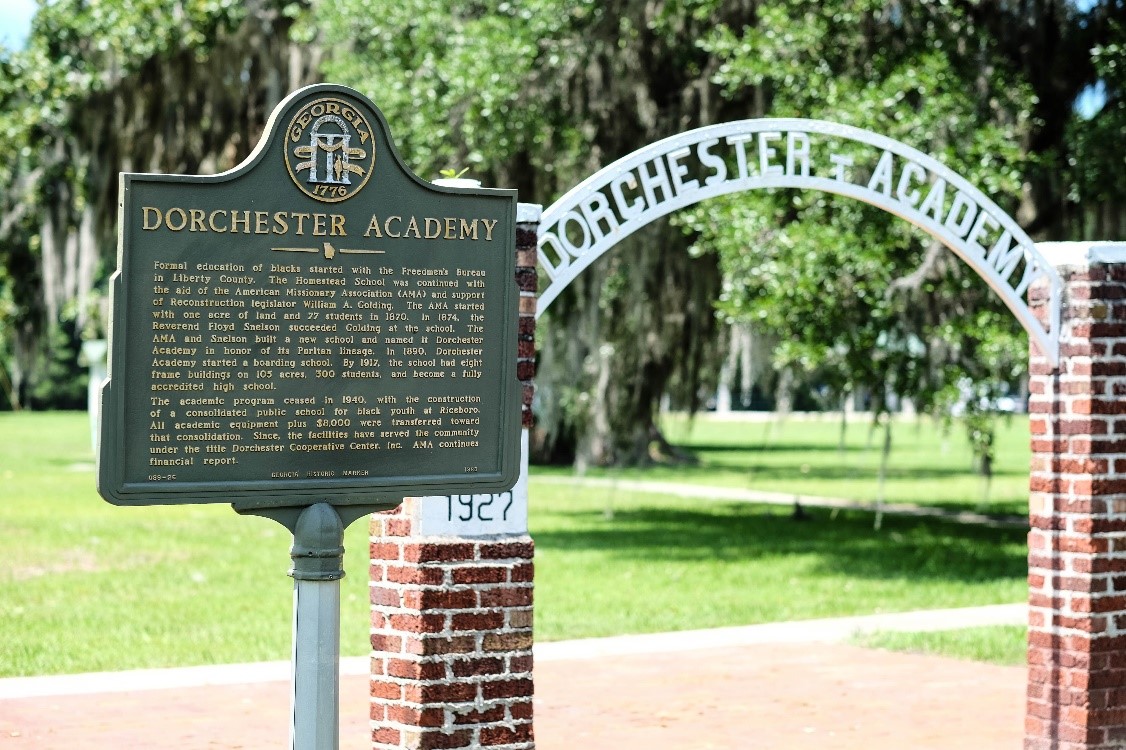 The History of Dorchester

Dorchester Academy was established in the 1880s, initially to educate the community but eventually focusing on vocational training as well. The industrial education helped to serve immediate trade needs for blacksmiths, bricklayers, carpenters, plasterers, and wheelwrights. The students and staff raised their own food using the large farm on campus, and sold livestock, eggs and chickens to pay for school operating costs. This knowledge of farming was another useful occupational skill for students post-graduation.

In 1896, Dorchester Academy’s first high school class with students of all races graduated, and was the first school in the state to graduate a 12th grade class. Students would walk upwards of 17 miles just to get to the Academy, and then go home to work in the fields ‘til dark. By 1903, enrollment was above 450 and Dorchester Academy was thriving. The academic program ended in the 1940s when a consolidated school for black youth was built in nearby Riceboro, but the pioneering spirit remained. 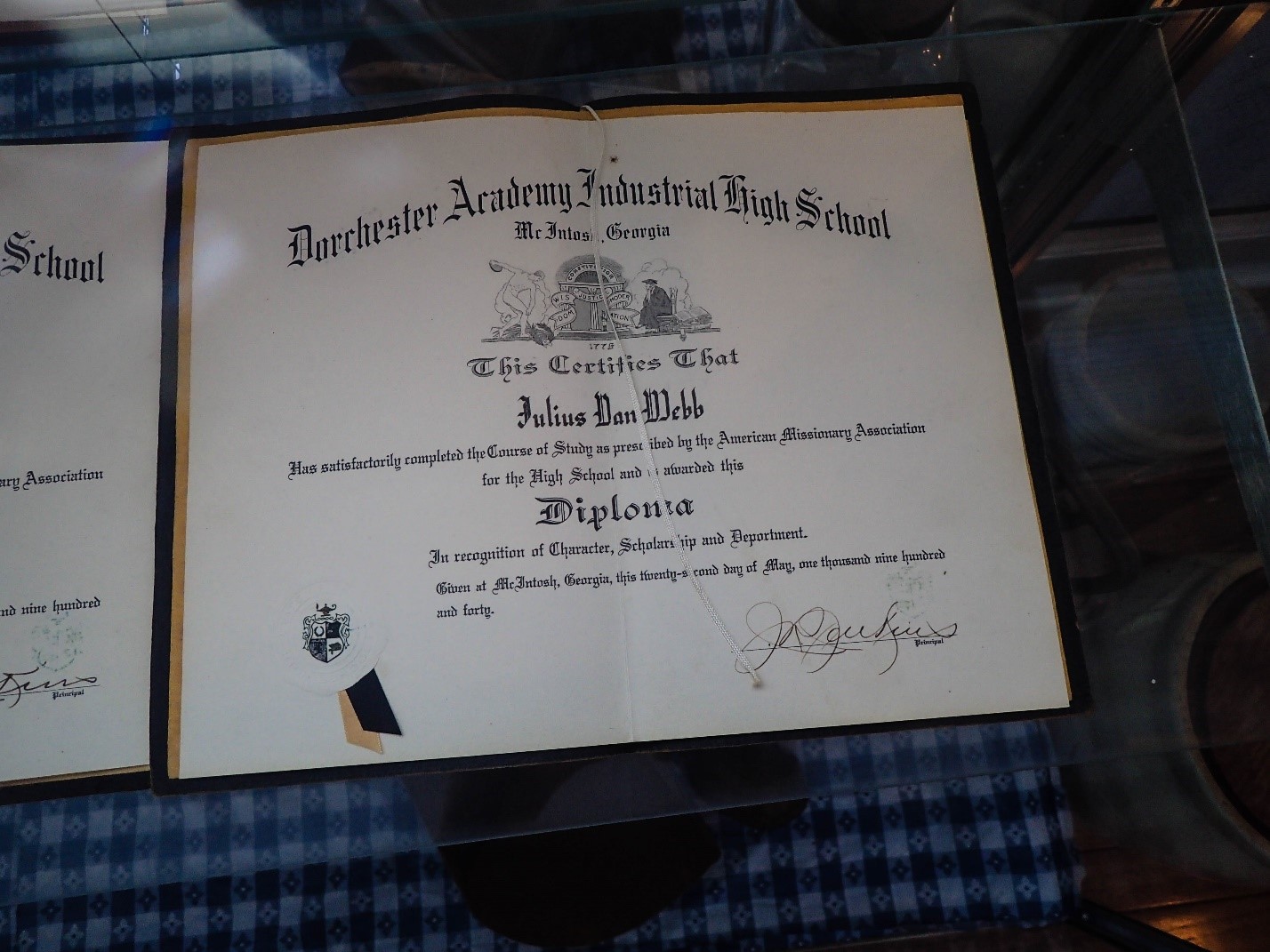 The Citizen’s Council and the $64 Question

The Liberty County Citizen’s Council was formed in 1946 at Dorchester Academy, and continued until 1953. Upon its creation, the council immediately went to work registering voters. The Citizenship Education Program (CEP) held at Dorchester Center was an adult literacy program dedicated to teaching literacy skills to black adults so they could pass their state’s voter registration test. Voting was seen as the only way to achieve true citizenship, and to change the lives of Southern black citizens. Although the Voting Rights Act had not yet been passed, voting was promised to all citizens regardless of race with the 15th Amendment and the CEP was determined to take advantage of this right no matter what laws were passed to deter them.

With so many obstacles standing in their way, the Citizenship Education Program worked tirelessly to ensure that literacy and citizenship became a reality for as many members of the community as possible. Once the students had learned all that they could, they were sent back to their towns to teach others. 897 citizenship schools were set up throughout the South by “providing full citizenship through education.”

The phrase, “The $64 question,” refers to an essential or ultimate question, the question that everyone wants to know the answer to. The phrase originated with a radio quiz show during the 1940s where the grand prize was sixty-four silver dollars. In 1946, the Citizen’s Council distributed a flyer entitled, “The $64 Question,” that depicted a man down on one knee, asking a woman, “Have you registered to vote?” A sign at the Academy features a section labeled as “The $64 Question,” and explains that registering to vote is important because you are “able to vote for elected officials who make and enforce the laws by which we are governed,” where to register, and how to register. Interestingly, the “how to register” segment of the sign mentions that one must, “keep calm and an even temper… you must be able to read and write.” The same sign identifies that intimidation and violence were used to deter black voters, and the Citizen’s Council made a point to dissuade anyone from reacting in a volatile manner. 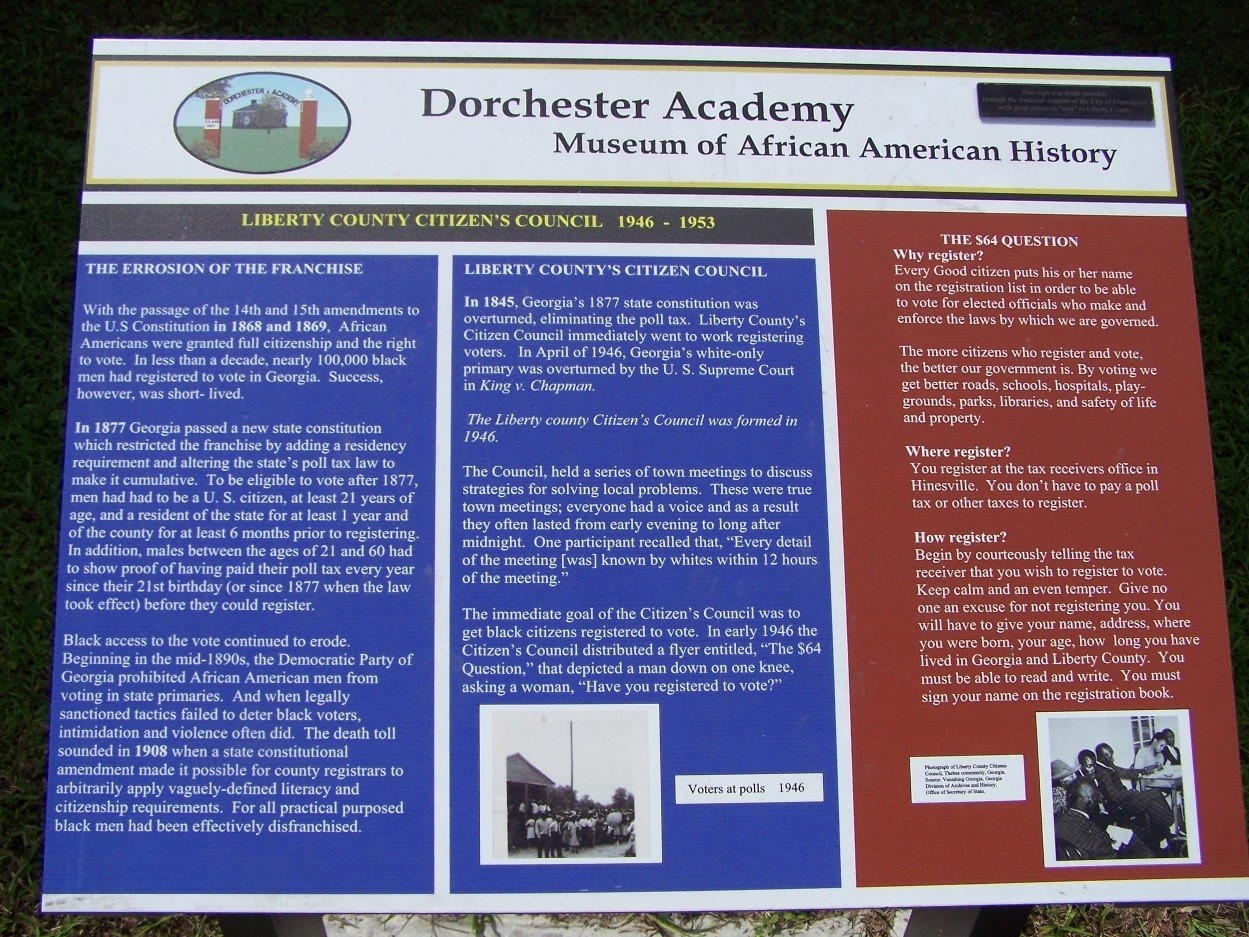 Significance During the Civil Rights Movement

In the 1960s, Dr. Martin Luther King, Jr., Wyatt T. Walker, Dr. Ralph Abernathy, Andrew Young and many other key figures visited Dorchester Academy. It was here that Dr. King worked on his, “I Have A Dream” speech. The space he used as living quarters is set up like it was back then, so visitors can truly experience what it was like when Dr. King was there. Meetings were held to teach supporters non-violent techniques in civil disobedience. Plans for marches were born. The leaders of the civil rights movement prepared for “Project C” during their time spent at Dorchester Academy, which would later be memorialized as the infamous Birmingham march and one of the first major victories for the movement. There was a time to work and a time to play at Dorchester Academy. Dr. King also used some of his time there to relax and play sports- from basketball to baseball, the photos help to soften a man memorialized for speeches and marches. 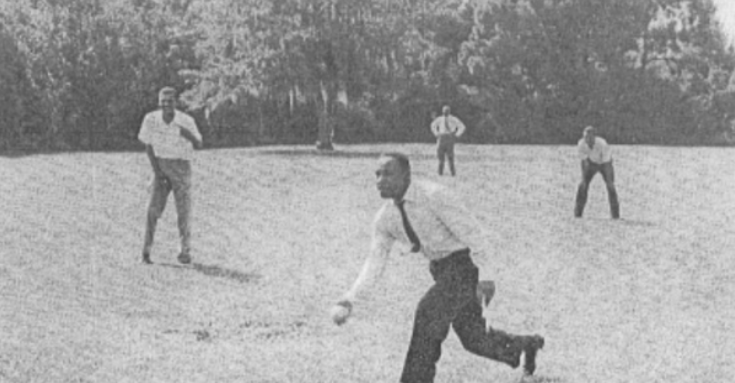 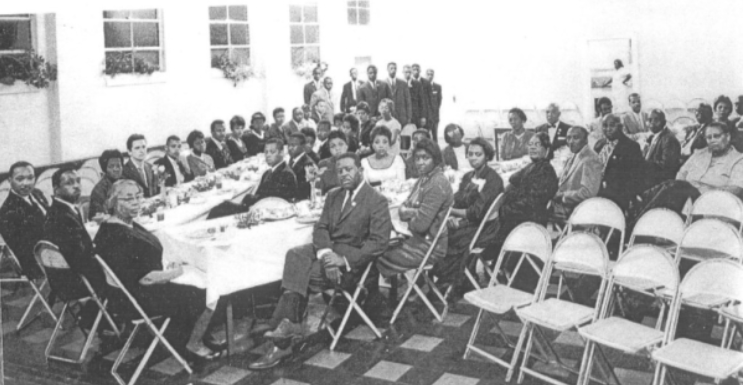