We’re always talking about how much history that this wonderful place we call home holds. The progression that we’ve made over the past two centuries is absolutely mind blowing! While browsing through an old Liberty County history book, we came across tons of historic photos that document all of it! We wanted to share some of them with y’all, so everyone can see just how far we’ve come. Check them out below! 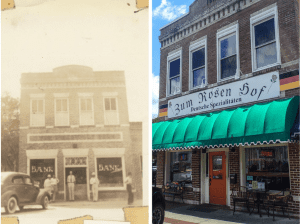 The photo on the left is what used to be the Hinesville Bank. This was the very first location that opened in the year 1911! Now, the building is the home of a local favorite, Zum Rosenhof, pictured on the right. Visit Zum for the best authentic German cuisine!

The photo on the left is the Old Liberty County Jail when it opened its doors for the first time in the year 1892. At this time, it was located at the south end of Hinesville. The area it’s in now is considered downtown Hinesville. The building is known to be one of the earliest brick structures in Hinesville and most likely all of Liberty County. Today it is a museum that you can tour and also has an art gallery located inside!

On the left you’ll see a photo of Liberty County’s historic courthouse right when it was completed in 1927! This building is still standing in the same spot today. It has been located in downtown Hinesville for many years and was recently remodeled to better serve the community! Nonetheless, it still sits beautifully in its original spot. 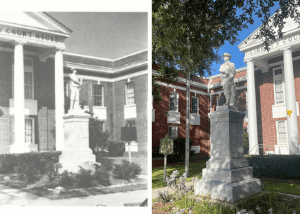 The photo in the left is a photo of a memorial statue that was erected in the year 1928. In case you couldn’t tell, it is located at the historic Liberty County Courthouse. Pictured on the right is what it looks now! Can y’all believe that it’s almost 100 years old?! 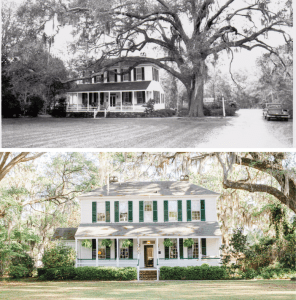 The Bacon-Fraser house is now home to the Liberty County Chamber of Commerce and Convention and Visitors Bureau. We don’t have the exact date that the photo on top was taken, but that is what it looked like back in the day. The photo on the bottom is what it looks like now, and it hasn’t changed much! If anything, it’s gotten even more beautiful with time! Before it became our office, 6 generations of Fraser’s lived here. We are so lucky that they trusted us to take care of it, and it’s amazing to be able to work in such a beautiful place every day! 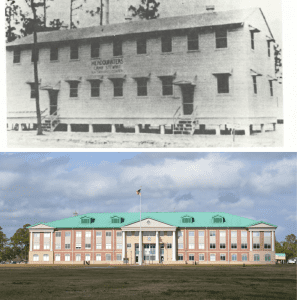 The photo on top is what the Midway Museum looked like when the doors opened, and the photo on the bottom is what it looks like today. In our opinion, it looks almost identical today compared to back then! It has been very well kept over the years. 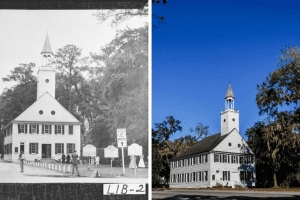 The Midway Congressional Church was established in 1752, but the original building was destroyed during the Revolutionary War. The building that is present in both images is the building that was rebuilt in its place in 1792. It has been well maintained through the years, and was placed on the National Register of Historic Places in 1973! 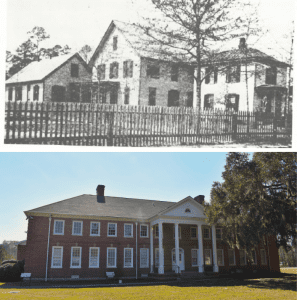 On top, you’ll see a photo of Dorchester Academy in 1927. The bottom photo is what Dorchester looks like today. The structure that stands now is the former boy’s dormitory, and it is in the process of being restored so that it can better serve its visitors. It is one of only 11 stops in Georgia on the U.S. Civil Rights trail. Martin Luther King Jr. and a number of other influential Civil Rights leaders used to spend time right here in Liberty County! 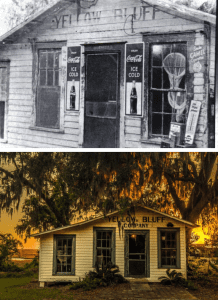 The Yellow Bluff store is another structure that has stayed the same over the years and aged like fine wine. The top photo is from almost 100 years apart from what it looks like now, pictured on the bottom! This is place that is many locals spent time at. Our CEO can remember fishing trips out of Yellow Bluff with her grandfather and the annual Shark Tournament. She still has one of the old t-shirts too! 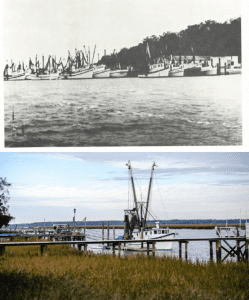 The former town of Sunbury is no longer in existence, but we found this photo from 1960 that shows what a bustling seaport it used to be.  It was actually a deeper natural sea port than Savannah! A man named Harford Morgan operated his fishing fleet out of Sunbury, and this is what a normal day looked like. Now, Sunbury is a quiet spot where people enjoy fishing, relaxing and eating fresh seafood on our intracoastal waterways.

We could go on for days with all of the history that Liberty County holds and show y’all even more. Our county is such a special and important place! If you want to learn more about our history, get out and #ExploreLiberty!