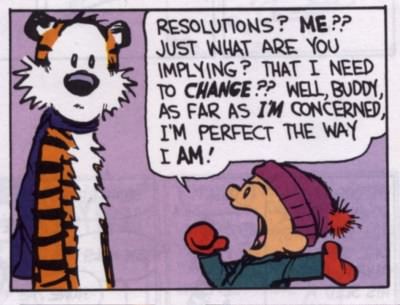 2016 has come and gone. According to some, it did more damage than other years, but for the sake of objectiveness, we’ll leave that to the history books. The New Year always feels to me like taking a deep breath. It’s good to exhale that musty carbon dioxide and inhale fresh air. There’s an energy about the digits of the year turning over that you can’t replicate any other time. I’m sure others feel it too and that’s why New Year’s resolutions happen. I don’t do traditional resolutions because I’ve never been very good at keeping them. The only time I can recall being vaguely successful is quitting smoking. I wanted to quit and just decided one year in January that I would. I honestly can’t remember what year it was and there was no formality about it, either. But it was an important decision that I made and something I’ll never regret.

The New Year is like that too; a chance to become better than you were the previous year and make positive changes that will make a noted difference in your life. Maybe the key is to start thinking about resolutions (if you decide to make any) as not just a small part of something we want to change but as something affecting your entire life. Then purposefully willing yourself to make that change that will bring about a new way of life.

I think it’s a mistake to overload on resolutions. Some people seem to get bogged down in the nitty-gritty of too many promises that they feel like they need to keep in order to be a better person. An example resolution would be to lose weight, but then you eat a doughnut on January 2nd and feel like a failure. Instead, it might be helpful to think of the overall benefits of losing weight (if that’s your goal) but instead of just focusing on weight, focus on making health a priority for the coming year. Then determine what you need to do to live a healthy lifestyle, including eating nutritious foods, drinking water and getting some exercise. If you eat a doughnut every once in a while, you haven’t failed if you’re eating healthy foods more often than not. Look, I’m not here to tell anyone how to live their lives, I just know that all these resolutions sometimes get overwhelming.

So what am I going to do to make me a better me in 2017? To start, I’m going to purposefully put my phone in a place where it’s not so easily accessible when I’m at home and with my kids. I’m addicted to my phone. I’ll admit it. I get almost all my news, whether it’s local, global or from family & friends on my phone. Not only can I read news articles about whatever topics I choose, I can also read the comments, which is highly addictive to me as well. Recently, my sweet daughter asked me to put down my phone while she showed me her dance. I really didn’t want to, but I had to so that she’d quit bothering me. Then I thought about that. She wasn’t bothering me. She just wanted me to watch her new dance move for a minute. I don’t think I need to give in to her need for attention all the time, but I don’t think my phone should be an excuse for ignoring her requests either. So, I’m going to spend less time on my phone and more time paying attention to and interacting with the important people in my life.

By leaving my phone alone, I should wind up with some free time. (One can only hope.) And with some extra time, I would like to start a hobby. I really don’t know what yet, but I want something that will be an enriching experience. Please don’t suggest rock climbing or collecting things of any sort. I’m not going rock climbing and I don’t want to collect a bunch of things. I’m still sorting out what I’d like to do, but I feel like it needs to be something that will make my brain grow. Maybe I’ll start crocheting, like my grandmother taught me when I was about ten years old, or start a garden or play the guitar again. Whatever it is, I’m hoping that it will provide a creative outlet that I feel like is currently missing from my life. By the time 2018 rolls around, I’d like to have a new skill, and have it be something I enjoy spending my time doing.

So that’s my list. It’s not long, but I feel it’s attainable. I believe if I can work on these two things, I’ll have made a positive impact on my life. Self-improvement isn’t a once a year thing, it’s a daily practice. I might fail some days, but the good news is that the next day is always a fresh start. Here’s to 2017!