Since the establishment of our hidden paradise in 1777, Liberty County has progressed in shops, restaurants & entertainment. But that doesn’t mean we got rid of the bones that built Liberty County, we’ve embraced them! Walk down memory lane with us as we reminisce on our favorite throwbacks. 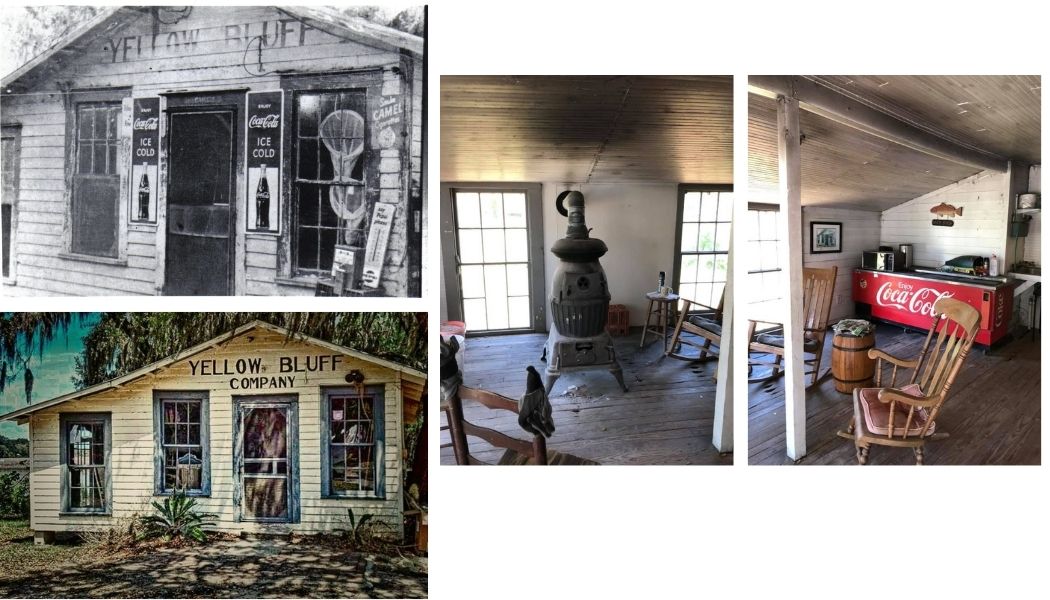 Clay Sikes- “The historic pic is from our archives but the modern day is courtesy of a local, Waylon McKinnon, who can remember buying his first beer at the old Yellow Bluff. It also served as a place of warmth on cold winter mornings, as Arthur and Mildred always had their old potbellied stove full of wood and roaring fire.”

The Yellow Bluff Company Store was built in 1924 in Colonels Island and is still standing today.

Buddy Maertens- “The photo on the left was taken over 100 years ago by my grandfather, Floyd E. Miller, of the historic Flemington Presbyterian Church in 1919. I took the photo on the right several years ago.”

The Flemington Presbyterian Church was built in 1851 and was placed on the National Register of Historic Places in 1982. The church still has services every Sunday. 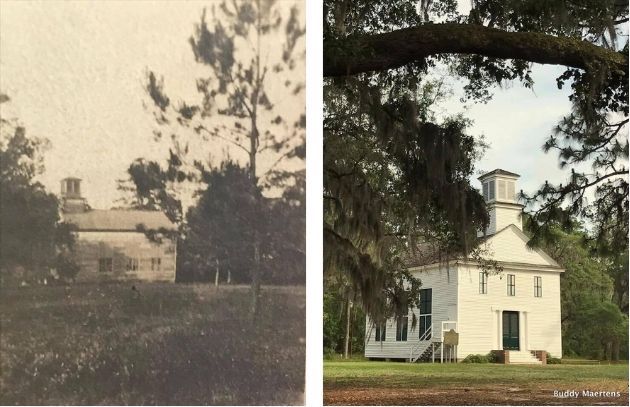 Buddy Maertens – “The photo on the left was taken 116 years ago of the historic Dorchester Presbyterian Church in 1904. The photographer is unknown. I took the later photo several years ago.”

The historic Dorchester Presbyterian Church was built in 1854. Services were held once a month at this church and still are. It was added to the National Register of Historic Places in 1986.

Buddy Maertens- “The E.C. Miller General Store, the ‘Wal-Mart’ of Hinesville in 1900. My great grandfather, Elbert Calhoun Miller, owned the store and built a beautiful Victorian home behind the store in 1902. Subsequently, Jennifer Flournoy sent me a picture last week of the general store which is still standing! The store was moved to Gause Street, renovated and is still used today as a judo studio.”

Main Street in Downtown Hinesville in the 1950s. Prince Preston for Congress can be seen on the nearby telephone pole. It’s really cool to see that downtown hasn’t changed much in structure since then!

The Liberty County Courthouse was designed by J.J. Baldwin and built in 1926. The courthouse was put on the National Register of Historic Places in 1980.

Named after General Daniel Stewart, Camp Stewart was established in September 1940. The camp was built to be an anti-aircraft artillery training center but shifted to armor & artillery training in 1959. Today Fort Stewart is the largest military instillation east of the Mississippi River.

The Old Liberty County Jail was completed in October 1892 to replace the one-story wood jail that was located in downtown Hinesville. The jail was used until 1970 when a new regional prison facility was built. In 1992 it was placed on the National Register of Historic Places. It is now a museum and available for tours. 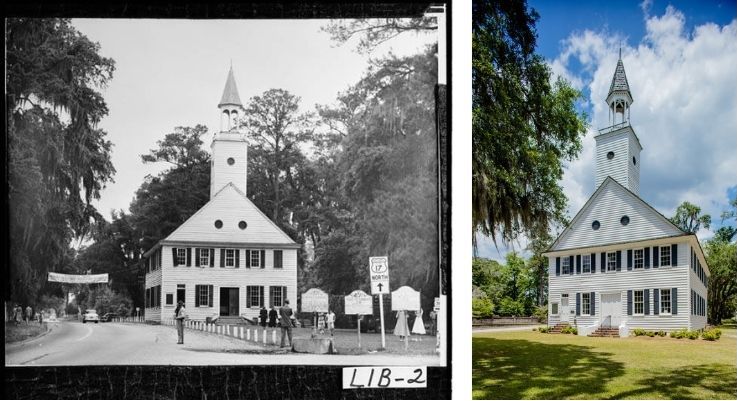 Established in 1752, the original Midway Congregational Church building was destroyed during the Revolutionary War and the present building was completed in 1792. The church and the adjacent cemetery were placed on the National Register of Historic Places in 1973. These photos are of the Midway Church in the 1950’s and the church present day. The Midway Museum, church and cemetery are all available for tours.

An old Chevron gas station on the corner of N Commerce Street and E Court Street in downtown Hinesville. The gas pumps are no longer there but the building still is.

Did you know that Hinesville was once home to a Coca-Cola bottling factory? The bottling plant was established in 1915 and served Liberty, Long & McIntosh counties until 1991. Old green glass bottles engraved with Hinesville, Ga like the one below can still be found but most are kept by longtime residents as memorabilia. The building is still standing but is currently not in use. 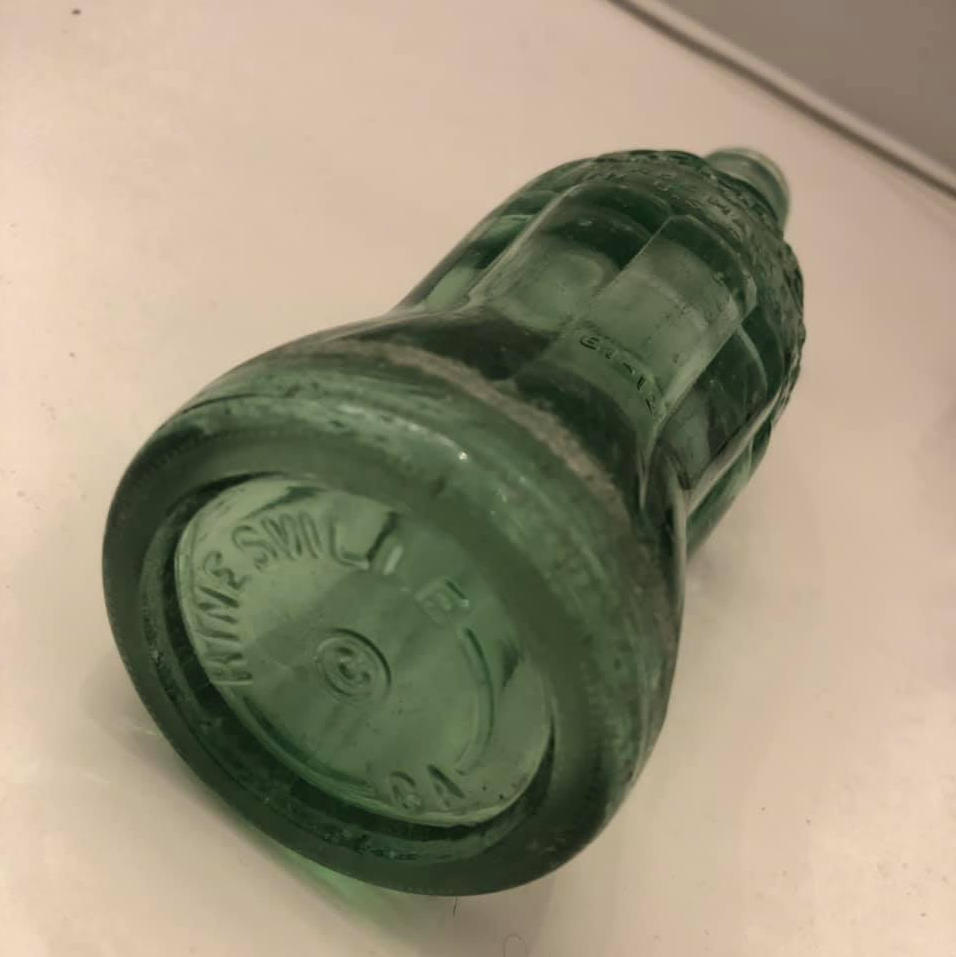