World Travelers to Liberty County Residents: The Story of Craig and Donna Hammell

We love finding people who stumble upon Liberty County and fall in love! People who truly love the place that they call home isn’t that rare, but for folks who have literally traveled the whole globe it’s new for us! Craig Hammell and Rev. Donna DiMeo-Hammell were a pair of gypsies traveling the world. The next day they became Liberty County residents… sort of!

They were tourists who stumbled into Liberty County and now they call this beautiful place home.  We discovered them on Instagram where they make great use of our hashtag #ExploreLiberty.

A little bit about Craig & Donna 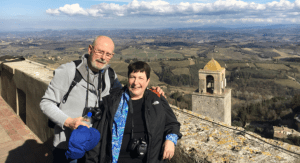 They both grew up in New Jersey and spent most of their lives there. Craig is a retired professional photographer who is very passionate about gardening. Donna is a retired clergywoman who now finds herself with enough time to read, crochet and socialize!

The couple has always enjoyed traveling and once they could afford it, they began taking one trip each year. During that time, they visited Turkey, Peru, Morocco, France, Italy and Fiji! They both set their retirement age at 63 and decided that was when they would leave everything they knew behind and set out to travel the world. A year before they reached the date, they started making serious plans about what their travels would look like. They began outlining their itineraries, making reservations and packing.

“Donna is an ordained minister, so our house was part of her salary package. We didn’t have that responsibility to worry about while we were away; we would buy a home after our two-year adventure. We did sell our cars and lots of our furniture until all that was left would fit into an 8×16 POD. We popped a bottle of champaign the day we locked the POD and began our 2suitcasesfor2years travels that took us to Ecuador, Guatemala, Portugal, Bulgaria, South Africa, Zimbabwe, Botswana, Ethiopia, Montenegro, Croatia, Italy, Belize, and Spain,” said Craig.

How in the world did they end up in Liberty County?! 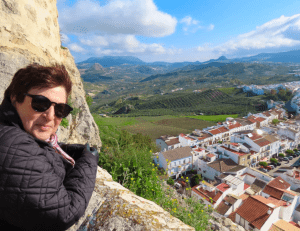 “We jokingly say that we are COVID refugees. In March of 2020, we were in Seville, Spain, which is a beautiful city. We were in the midst of a three month stay, and enjoying life there. Since we don’t speak Spanish, we weren’t aware of the local news concerning the virus but were monitoring the changing international news about the pandemic. We noticed that the crowds at the tourist attractions were getting smaller and the city quieter. The decision was made for us one day when we were walking through the nearly deserted main plaza when two police officers approached and informed us, ‘the city is closed, all tourists have to leave.’”

They went back to their apartment in Seville and started trying to figure out what to do.

“As we searched online for information, we realized the seriousness of the situation. One of us thought that it would clear up in two weeks or so, and the other wanted to go home immediately. After a short time, we concluded that we’d better head for home. The airports were closing, and soon we wouldn’t have a say in the matter.”

The couple quickly bought their plane tickets back to the U.S and even spent the night at the Madrid airport sleeping on the floor. They don’t recommend anyone try it out, but 24 hours later they were back in the U.S.

Where in the world are they going to go?

“It was at that point in the adventure that we realized we shouldn’t go stay with our kids, as we had originally intended – we could quite possibly bring them a virus! Our dear friends who live in St. Mary’s, also have a vacation house on Lake George, and they graciously offered us this safe place to stay. Little did they know it would be for a year!”

Their original plans included settling in New Mexico, but they quickly changed their minds during the first year of quarantine. They loved Lake George in Midway, the scenery and the quietness that it offered. It was the perfect place for them. 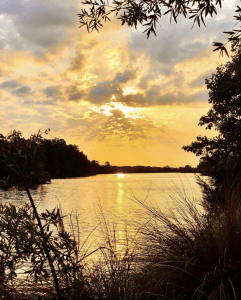 “We missed out on a few nice properties, and then learned of a half-acre lot for sale right on the lake. Sold! We quickly chose a contractor and a house plan, and one year later we were permanent residents!”

Livin’ and Lovin’ in Liberty County

The couple says that their favorite thing about living in Liberty County is the tranquility that it provides. They never get tired of the lake view with the marsh behind it and the endless blue skies! They also love watching the variety of birds that make their home here. The proximity to the airports in Savannah and Jacksonville is a huge plus, since most of their friends and family live out of state and have to fly in. Not to mention, their newfound love of fresh Georgia seafood!

Why They Love This Place They Now Call Home 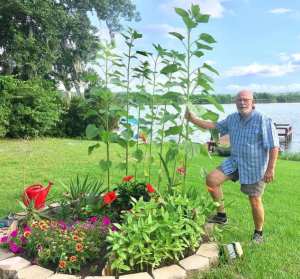 “Just watching the grass grow has become our catch phrase when the kids call to see how we are doing,” the couple said.

They love the slow pace of life here in Liberty County. It fits them so well at this point in their life. The couple appreciates that the property taxes are much lower in comparison to the previous area that they lived in. This makes their retirement dollars stretch further, which is definitely an added bonus!

“In a roundabout way we we’ve come full circle back to Georgia.  After leaving our home in Pennsylvania we drove down the east coast visiting friends and family. Our last stop was Georgia before catching a flight out of Jacksonville. We never expected to come back two years later and call it home.”

We sure are glad that they came decided to come home. Craig and Donna’s story makes us hopeful that we can convince more gypsies to stop roaming and settle down with us in Liberty County! To see more photos and read more about Craig and Donna’s world travel experiences, visit their blogs at 2suitcasesfor2years.com and bornwithgypsyshoes.com or follow them on Instagram @2suitcasesfor2years.