Posted on June 3, 2022 in The Right Blend Blog, Uncategorized 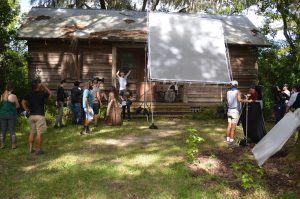 📸 via film set of A Soldier’s Heart

Liberty County is the perfect place for coastal views and good food, but did y’all know that it’s also a prime location for film productions?! The beautiful dirt roads, open wooded areas, classical colonial architecture and even black water swamps make for some of the perfect locations to film no matter how big or small the budget is. We’d be willing to bet that some of your favorite movies and TV shows have been filmed right here in our backyard!

As the Camera Ready Liaison for Liberty County, we are the spot for production crews to get all of their necessary permits, resources and general information about the area. The requests that we get from scouts are usually for photos of anything and everything! Location scouting is what grabs the attention of producers, so we are always happy to take photos of our beautiful county to share with them. We have no way of knowing when we will get a request from a scout or where it will take us, but we’re always up for the challenge and adventure. It’s one of the many perks of our job, and it always keeps us on our toes!

What Film Does for Our Community

One reason that we love the film industry is because it benefits our whole community. People love to visit spots where their favorite movie or TV show was produced! The part of filming that means the most to us is that the cast and crew add to our economy while they’re in town. They rent out dozens of rooms at local hotels, order catering from our restaurants, shop at grocery stores, wash clothes at neighborhood laundry mats, pump gas at local gas stations and utilize whatever other resources that they may need while visiting.

In 2017, when John Cena’s popular TV show American Grit filmed here, they bought every bicycle that they could find in Liberty County. They needed them to get around town, because we don’t have many Uber or Lyft drivers. The spending that the cast and crew do is called clean spending, and it has a very positive impact on our local economy. We measure this by the increased amount of tourism dollars that have come in the last couple of years.

It’s pretty cool to see famous people that we’ve only seen on screen at spots in our county that we know and love! In fact, Tyler Perry actually filmed in our offices, at the historic Bacon Fraser House. Jamie Lee Curtis was spotted at the IGA in Midway, and Oprah Winfrey snapped a photo on the front steps of the historic Dorchester Presbyterian Church! Curious what movies and television shows they were in town for? Below is a list of the many productions that have filmed here in the past, some of which haven’t even been released yet!

Keep an eye out for our beautiful county whenever you’re watching any of these great productions! Interested in filming here? Remember that a film permit is a requirement. Find it by clicking here! Come #ExploreLiberty, and we’ll be ready for you!